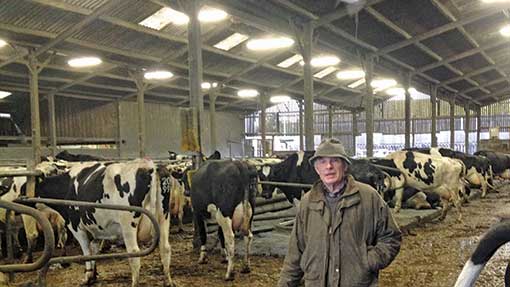 Getting building light levels at the right intensity, and for the correct period of time, could help dairy producers push cow performance to the next level.

Ensuring cow-building light levels are similar to those in the local supermarket has helped one Leicestershire dairy farmer improve submission rates, boost staff morale, and up milk yields.

Lighting sheds at a similar level to those in the grocery aisle may seem extreme, but research has shown providing cows with 16 hours of lighting at 150-200 lux, followed by eight hours of darkness, can result in a 7-8% increase in milk yields.

There’s also likely to be benefits in terms of bulling behaviour and dry matter intakes.

After hearing the potential benefits from Kite consultant Chris Flint, dairy farmer Martin Beaumont was convinced that addressing light levels was a logical next step, after having already made improvements to general cow comfort.

“Our buildings have always been quite dark. A lot of the original buildings were put up in the 1970s and have been extended over the years,” explains Mr Beaumont.

“We’ve got five spans of buildings joined together and there’s a lot of old roof lights that have got darker and darker over the years,”

After speaking to Mr Flint, Mr Beaumont, who milks 250 Holsteins in partnership with his wife Carol at Shorn Hill Farm, Twycross, decided to investigate building levels using a light meter. Readings found light levels were significantly below where they should be.

“We took light readings throughout the building and found it was dark all over, with the light meter reading 40-50 lux. Even directly under the lights it was nowhere near what it needed to be,” comments Mr Beaumont.

At the time, the metal halide lights were kept on 24 hours a day in the belief it would help cows get to the feed trough. However, Mr Flint explains how a period of darkness is just as important to cow perforamnce as the light level itself. “You need to have eight hours of darkness. If you keep lights on all the time you won’t see an effect,” he says.

Having light at the right intensity when they are on is also crucial. Failure to achieve 150-200 lux for the required time will not deliver the full benefit.

After the initial assessment, Mr Beaumont called in an electrician to carry out a lighting plan survey.

This was used to work out how many lights were needed and where they should be positioned to deliver the required lighting level throughout the building.

“There have been a lot of adverts about LED lights, but when we costed it out it wasn’t cost effective for us, as the capital cost is big and the payback is too long,” says Mr Beaumont.

In the end, he decided to opt for fluorescent lights, which have been distributed above each cubicle row to deliver even light through the whole shed.

Installed in the summer last year, the lights are on a timer so they automatically go off at 10pm and on again at 4am – half-an-hour before milking. A sensor also means they are only on when natural light is insufficient.

“The lights go on before milking, which means cows are up and at the feed trough.

“The fact they’re not half asleep has been noticeable and means it’s a bit easier to get them in the parlour,” says Mr Beaumont.

“We’ve noticed quite a change in the cows. They’re brighter during daytime hours and there’s been an increase in bulling activity. The light also means we can spot them easier,” he says.

Stronger bulling signs means cows are easier to pick out for service and it has helped improve submission rates.

Between 1 January and 3 April, submission rates were 45% versus 39% for the same period last year, before the lights went in.

In terms of milk production, Mr Beaumont says his “gut feel” is that light has helped yields, along with intakes. However, it is difficult to quantify because of so many other influential factors.

If yields this April compared with the same month last year, rolling yield is up from 8,570 litres a cow a year to 9,374 litres.

The figure, which follows a blip in 2013 after Schmallenberg and poor forage in 2012, could be higher still.Mr Flint says work in the USA has shown providing the right amount of light results in an average 7-8% increase in milk.

“Longer periods of light decrease cow melatonin levels. This then stimulates the liver to produce more IGF1 hormone, which is beneficial to milk production,” he says.

The new lights and lighting policy mean Mr Beaumont estimates he is using roughly 25% more electricity when lights are on, but he is actually reducing energy waste now that lights are off for a period of time.

“I’m possibly only using between 10-20% more electricity overall, but when the lights are on, it’s more efficient and I’m not wasting it any more,” he says.

He recommends farmers go out and measure lighting in their buildings and carry out a proper lighting plan. “A lot of buildings are darker than you think. If you can’t afford to do all your sheds maybe do it for the high yielders.

“But you’ve got to get cubicles and feed space right first and then lighting,” he stresses.

Mr Flint agrees that lighting is “the icing on the cake” after everything else has been addressed.

“Before you address lighting, look at ways to remove other barriers to milk production.

“In isolation lighting is not the answer, but where management and facilities are decent, it could take farmers up a step,” he says.