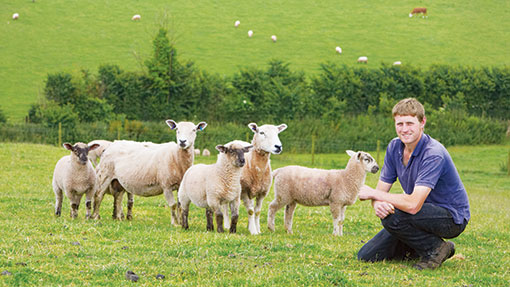 Simple record keeping has helped to reduce lamb losses by 4.3% in the past three years on a Somerset sheep farm.

David Knight manages a flock of 700 ewes at the family run Wydon farm, Minehead and began recording eight years ago because of lamb losses to see where and why he was losing them.

See also: Tips on ewe nutrition in the run up to lambing

“It’s very easy to lose track of what would appear to be the odd lamb here and there during the season and not appreciate how fast the numbers are adding up,” he says.

Only one year after Mr Knight began recording, there was an outbreak of pulpy kidney on the farm. “We lost 25 lambs, all at three to four weeks old. Obviously with that many deaths we didn’t need records to know we had a problem, but looking back through them we saw the age pattern and that let us see the bigger picture.”

ADAS sheep consultant Kate Phillips says comparing farm data to benchmarks or to performance in previous years is vital along with discussing the data with your vet or livestock consultant to help identify issues and remedial action.

This will help improve flock productivity year on year, she says.

“It is essential all health issues and losses are recorded in detail to aid identification of the cause,” she adds.

As many diseases are age specific, records can be invaluable in aiding disease diagnosis with your vet. Mr Knight looks at the data one month after lambing after the “critical period” is over and discusses any trends or patterns found during the annual flock health planning with his vet.

As a result of picking up pulpy kidney, Mr Knight was able to make an easy decision to vaccinate the following year.

“I could clearly see the number of lambs I no longer had versus the cost of vaccination, it was a no-brainer. We’ve vaccinated each year as a result and stopped it in its tracks.”

Another area where measuring and monitoring has helped Mr Knight, is identifying problem ewes. One year there was a particularly high barren rate and a number of ewes aborted three weeks before  lambing.

“It’s been really useful to look back at the records and see exactly what the problem was to help make informed management decisions about culling.”
David Knight

“It took the bad barren rate for us to register a problem, then looking back through the records we could see that several lambs were mummified, weak, or ewes scanned as twins only had a single.

“These things we had not taken much notice of as individual cases but seen all together, helped us diagnose what the problem was, which was confirmed with blood tests as toxoplasmosis, and we now vaccinate against this too.”

Health records have also helped Mr Knight identify other issues including prolapse and lameness. He gives these ewes a plain orange tag to indicate a problem.

“It’s been really useful to look back at the records and see exactly what the problem was to help make informed management decisions about culling.”

The most significant improvement seen in the flock is the drop in lamb deaths.

Last year lamb losses were at an all-time low of 6.7%.

Mr Knight attributes this improved result to his encouragement of an honest and open recording system.

All staff write any problems on a whiteboard in the lambing shed as soon as something happens and Mr Knight transfers this information into a record book.

“It’s easy not to realise the problem until it’s on paper in front of you, but once you have the figures you can do something about them,” says Mr Knight.