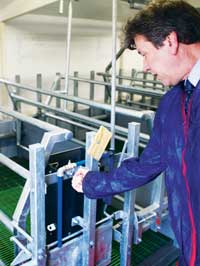 Indoor pig farming seldom hits the headlines for being welfare friendly, with conventional crates often slammed for restricting sow welfare. But a new farrowing pen design could change that, with pigs able to exhibit nest-building behaviour as well as protecting piglet welfare.

Freedom farrowing crates are nothing new, but are often criticised for jeopardising staff safety as well as taking up more room than a conventional crate. And it was for this reason that Midland Pig Producers’ Martin Barker decided to design and install new pens at one of their units near Burton-on-Trent – to meet sow, piglet and staff needs.

“We installed some freedom farrowing pens on one of our units in Oxfordshire several years ago. Although we were getting heavier weaning weights and slightly better numbers born alive than in conventional crates, they took up more room and, from a stockman’s point of view, they were hard to manage and also put staff in danger,” he says.

In normal freedom farrowing pens the sides are high, making it hard to see the pigs, and access to piglets is also hard, meaning staff often have to climb in to access piglets – putting themselves at risk from the sow.

“The fact they are also 25% bigger than conventional crates means either extra space has to be found or sows numbers have to be reduced,” says Mr Barker.

But the new pen, the 360 Farrower overcomes these problems and fits in the same footprint as a normal farrowing crate, as well as offering more for sows and staff, says Mr Barker.

“The new Farrower also allows stockmen to walk straight through the pen to access piglets while being protected from the sow. Piglets and sows are more visible because the sides are open, which also aids airflow around the building,” he says.

Mr Barker says piglets’ weaning weights have increased by 25% from 7kg to 9kg in both the freedom farrowing crate and the 360 Farrower. “This extra weight means we expect pigs will go off farm 10 days sooner and this in itself saves £5 a pig. We produce 12,000 pigs a year so that’s a £60,000 saving a year,” explains Mr Barker.

Indirectly by using the freedom farrowing crate, and more recently the 360 Farrower, sow fertility has also improved. “Because sows can turn around and because they are able to demonstrate nest-building behaviour prior to farrowing, sows seem to eat more and milk better, which is why piglets’ weights have increased. And because of this, at weaning, sows are also in better condition at weaning which boosts fertility.”

The 360 Farrower also has specific flooring types to maximise sow comfort. “We have two types of slats and these set out dunging, lying and loafing areas, making it better for the sow. Piglets have also got heat pads, instead of lamps, which are heated with hot water. These are easier to clean and less of a fire risk,” he says.

An underground flushing system has been installed in the room containing the 360 Farrowers. “Because we are providing paper bedding for nest-building, the flushing system washes the material away so it doesn’t clog up. This flushes every 48 hours and in turn this reduces fly numbers and odour by 75%.”

Mr Barker admits that, when staff first began using freedom farrowing pens at the unit in Oxfordshire, they were against them.

“It took a while for staff to get over the emotion of it, but now they want all conventional crates replaced. It was a bit like myself with the stall ban; initially I was dead against it and it took me a while to admit I was wrong and that managing sows outside stalls was better.”

Piglet mortality was also something that worried staff initially where sows had more freedom, but this is easily managed, says Mr Barker. “Once piglets are born sows are restrained from turning around and after four days are released so they can turn around in the pen. We open sides after four days as we found when piglets were younger mortality could be as high as 30%.”

The 360 Farrower is one of several entries for the Pig & Poultry Fair‘s Best New Product Award. The winner will be announced on the first day of the event.