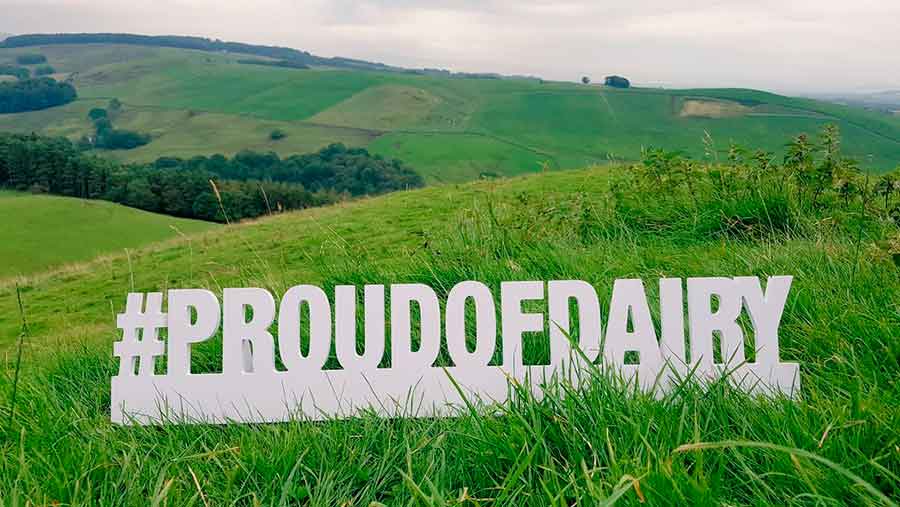 Milk producers from across the UK have rallied behind the #proudofdairy hashtag to promote all that’s good about British milk.

Dairy farmers turned their hands to film-making to shoot short clips showing why they are proud to work in the industry.

The initiative was the brainchild of the NFU Dairy. It was intended to propagate a positive message during this week’s anti-dairy campaigns.

Farmers Weekly has selected our favourite videos and tweets sent in as part of the initiative, which will be running until the end of the week.

Coming to a timeline near you #ProudofDairy is about to launch pic.twitter.com/za7XwAIpvG

The best part of dairy farming is working with the cows! Meet David a dairy farmer for 49 years & see why he's #ProudOfDairy @NFUnortheast pic.twitter.com/qmf63LuUbD

Keeping it strictly professional, Yorkshire dairy farmer David keeps his composure despite one of his Jersey cows’ best efforts to steal the limelight.

Welsh dairy farmer Will Evans (@willpenrievans) shows that dairy farming is very much a family affair.

Many dairy herds have generations of the samefamily in one herd, meet Richard and Molly from Cheshire and her amazing progeny! #proudofdairy pic.twitter.com/dYFXWUyfZP

Exemplifying his Spielberg-like editing skills, dairy farmer Richard, from Cheshire, explains how he has three generations of the same family in his herd.

Did you know milk is more hydrating than many sport drinks? One of the reasons dairy farmer Rob wants to #keepdrinkingmilk #ProudOfDairy pic.twitter.com/oXAXq68v6T

Another dairy farmer, Rob from Cheshire highlights the nutritional value packed into every glass of milk.

“That’s because it helps the body retain fluids for longer.”

Despite being a mainly arable farmer, I like to think I can still support and be #ProudofDairy pic.twitter.com/bHUAysOiUj

Former dairy farmer John Charles-Jones (@woodboroughpark) overcomes his aversion to selfies to show why he’s proud to supply the nation’s cows with wheat for their feed and straw for their bedding.

Many herds of dairy cows like ours graze land unsuitable for arable crops to keep our countryside green & fertile. #teamdairy #proudofdairy pic.twitter.com/cDlwI5H5dz

On their way in from the field the girls can't resist a scratch on one of the brushes we've put up for them. #proudofdairy #lovecows pic.twitter.com/NhfLD4FYlh

William Maxwell (@Ballygreenan) shows that happy cows are good for everybody and any help farmers can provide to reach those hard-to-scratch places is very much appreciated.

#ProudofDairy & teeth: This 25yr old patient didn't have regular milk in diet as child. Carbonated drinks in teens have destroyed his teeth. pic.twitter.com/1s6dEpio6L

“Plus I’m contributing to that fantastic patchwork landscape that we’re all so proud of.”

Just turn the volume up for this one. You won’t regret it.

I'm loving the #proudofdairy tweets, my time line is full of gorgeous cows and countryside. #thankyoufarmers

The NFU is asking anyone interested to record clips highlighting the following subjects:

The aim is to gather a diverse selection of clips from different stages of the dairying process, filmed from a variety of locations. The Union said all clips should be recorded in landscape position.