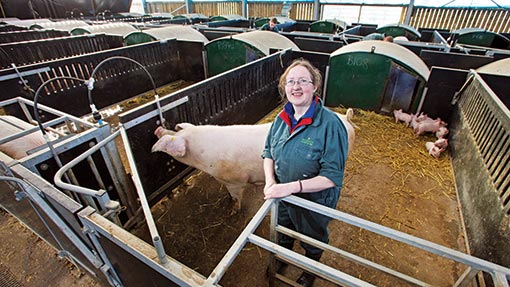 The new farrowing village set-up at the college, which is part of a £1.2m investment in a new high-welfare pig unit, contains insulated, stainless steel arks identical to those used in conventional outdoor systems.

The system sees 10 sows farrowing every fortnight in the concrete-yarded farrowing village. The straw-bedded arks allow sows to farrow freely – there is no containment within the ark – and each ark is surrounded by an individual pen.

Pig unit manager Steve Smith says the ark system does demand high standards of stockmanship to achieve the increased litter size, but their target is to achieve 12 weaned pigs a litter.

“We are going to make some modifications to the way the heat is provided for the piglets. We’re switching to heat lamps and will install a chimney on the outside of each ark. They will replace the temperature-regulated ceramic heater system we’ve been using and will give us a better heat source and provide more light,” he says.

Pig unit assistant Julie Baskerville says managing sows at farrowing time can be a challenge, but the system meets the high welfare codes that underpin the design and layout of the new unit.

“We are careful not to overbed the sows at farrowing time,” says Ms Baskerville. “We used to farrow sows in crates in the old unit, but the farrowing village meets the criteria for Freedom Foods – and it’s good to see sows moving around freely and behaving naturally with their litters.

“We are very strict about monitoring sows at farrowing to help minimise any losses. We want to keep them calm and stress free and use BPEX farrowing discs so we know how often a sow has been checked.”

There are 30 arks in the village, run on a five-week roll-over batch system. “We’ve gone up 1-1.5 pigs a litter since we switched to the ark village,” she says.

Each ark carries a data sheet enabling students to monitor and record information about individual sows, including temperament as well as regular body condition scoring. “It’s good experience for the students, but it also provides us with important performance data.”

Lactating sows are fed once a day on a 16% protein ration and creep feeders provide a 19% protein pellet to piglets from seven days old. Three days after weaning, the piglets are put on to the second-stage weaning ration for two weeks before being switched to the ad-lib growing diet.

“At weaning, the piglets are moved into one of the two new buildings on the unit and run in batches of 50 head a pen. We keep them on the creep for three days and then move them on to an ad-lib grower ration for 14 days.

“The average time from birth to slaughter is 20 weeks, with the aim of producing a 78kg deadweight pig – although recent figures have shown we’re doing better than this. All finishing pigs are bedded on deep straw,” she says.

But it’s not all been plain sailing, admits Mr Smith. “We’ve had a few issues with nutrition and were finding some pigs were finishing over-fat.

But because we are carefully monitoring performance and working with BPEX, we’ve now made changes to the diet and are back on track in terms of performance and carcass quality. The finishing diet is now 16.5% protein.”

Sows are producing 2.5 litters a year and averaging five litters.