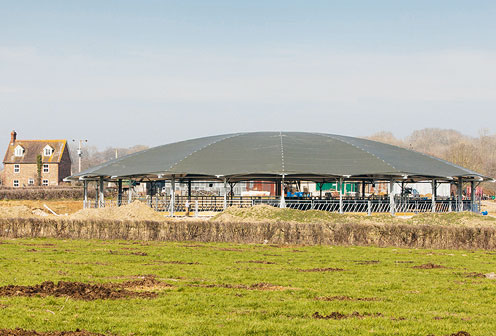 The first 45m (RH45) roundhouse building in the UK, at Fulling Mill Farm is nearing completion.

It will house a herd of 100 Simmental-cross cows and 200 followers and includes a central handling system and crowd pen, which is accessible by all of the seven pens that surround it.

Each pen is designed to hold 18,000kg, which equates to about 30-50 animals, depending on their size.

The spherical design with central handling area is fundamental to the idea of the roundhouse, as are the completely open sides and “tented” roof with central air outlet.

(See the roundhouse photogallery below)

Farmers Mr and Mrs Eggert-Hobbs explained that lower labour inputs, improved animal welfare and efficiency were key reasons why they had decided to make such an investment.

“The handling system means we should be able to handle the same amount of cattle as in our old system, with one or two people, rather than four. The “safe area” is also particularly appealing to me,” explained Mrs Eggert-Hobbs.

She has modified the design of the handling system from the 30m version to include an additional pen for segregation, allowing stock to be split for sending to market or tagging, for example.

She said: “Getting labour in the South East is not only expensive, but also difficult. If I can halve the number of men I need to bed up and feed up, it’s a big bonus, and with the roundhouse I expect to use 35% of the labour I would have used if I had put up a conventional shed.”

The roundhouse has offered the business a means of expanding the herd. Having given up dairy farming 12 years ago, beef appeared the best option for the resources available, however they were limited by farm infrastructure.

When looking at putting up a conventional building, the cost of concreting loafing and feeding areas meant it was not viable. However, the roundhouse ticked all the boxes.

The pens have a chalk base, which has been consolidated and sealed, with the outside surrounding feed area concreted and the area beyond this covered in tarmac plainings.

The new shed is also hoped to boost efficiency. “We wanted to put the economics back into the system and finish stock quicker,” she added.

The business currently finishes 60-70 cattle a year, but it is hoped that the roundhouse will help reduce finishing times by three weeks and boost this number.

“The roundhouse gives us options to use it as we like. At the moment we have stock of mixed ages together, but the pens will allow us to separate animals as we want to.”

The new building and existing sheds give the farm scope to farm 500 head, with the aim in the future of renovating one of the old sheds and potentially putting up another roundhouse.

The roundhouse is also hoped to bring big welfare benefits – something Mrs Eggert-Hobbs sees as becoming even more important in the future.

“I think farmers will get clobbered for improved welfare in the future and I want to be prepared.”

Good ventilation is also a bonus of the roundhouse and an area Mrs Eggert-Hobbs has noted of particular importance following pneumonia problems in the past.

“Three or four years ago, I was rearing bull calves from a local dairy producer and was experiencing big problems with pneumonia. It was so disheartening – I was pulling out dead calves nearly every day and spending a lot on the vet.

“In the end I just chucked them outside and I probably only got one case after that. It was a big eye opener and made me really conscious of ventilation and air flow.”

At about £149,500, the building is a significant investment, but one both the Eggert-Hobbs and building designers Geoff Simpson and John Allison, of the Simpson and Allison Group, think will bring significant payback.

The emphasis should not be on what something costs, but rather what the potential benefits are, said Mr Simpson.

“The initial cost may be high, but the paybacks could be rapid in terms of improved animal health and reduced labour, vet costs and handling.”

A general project, excluding groundwork, would be about £1,050 a dairy cow place versus £1,317 for two-row cubicles or £1,052 for two-row kennels plus mats (DairyCo)

Key attributes of the RH45

Who can use it?

Why choose the RH45?