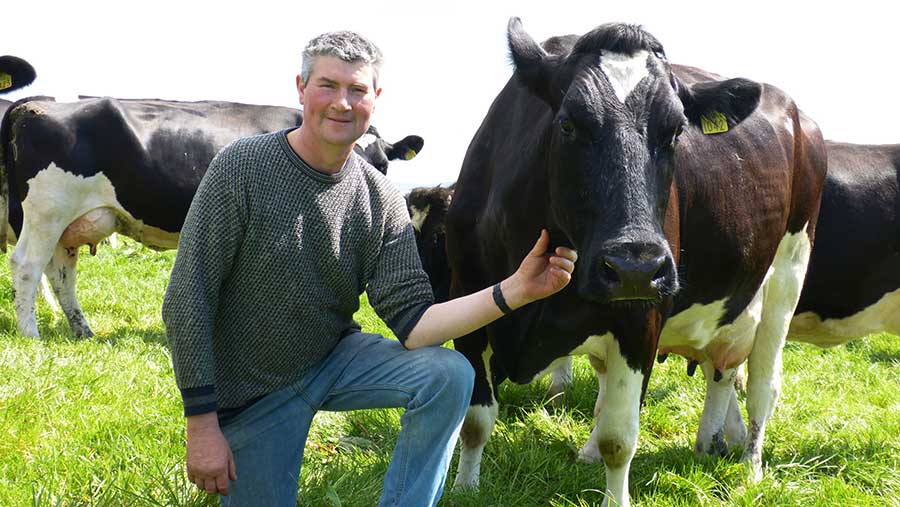 For two and a half years their herd was ranked the number one economic breeding index (EBI) herd, but the Flynns have fallen from the top spot and see an industry that is changing.

“Commercial bull buyers seem to be looking for cows that can deliver 7,200 litres and more,” explains Mr Flynn, who says he has two flasks of pure Friesian bulls he no longer deems worth using.

“Cows ticking along doing 5,000 litres appear to be in less demand than they were.”

But in only his second year of using Holstein straws, Mr Flynn stresses that he can make the switch back to Friesian if he needs to, with both Friesian and Holstein having their merits.

“We sell around 50-60 bulls a year normally, but in 2016 we sold only 40,” says Mr Flynn. “It looks like we need a bigger cow, but a fertile one. We have bulls marketed by Cogent but most of our genetics stay in Ireland.” 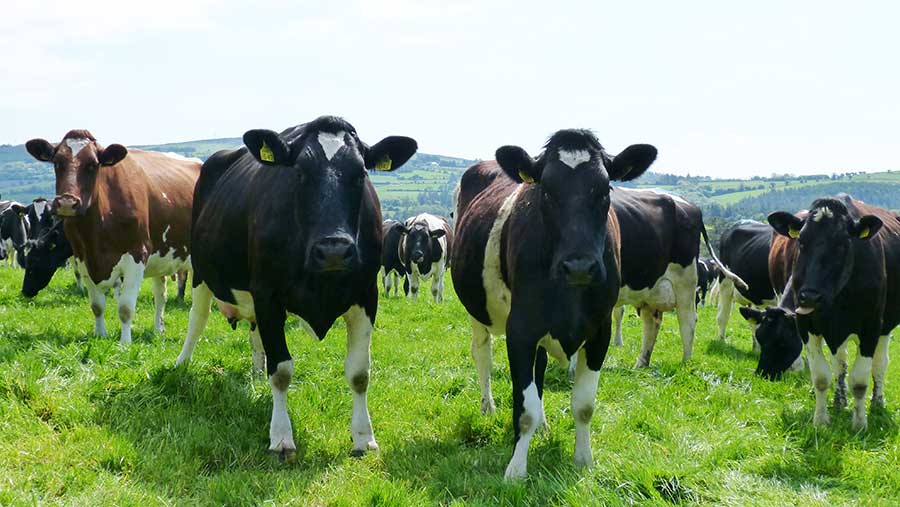 A major effect of the EBI index, which rates all dairy breeds, has been the massive improvement it has brought to the national calving index.

At Coolmohan, the average calving interval is 364 days in a herd with many cows at fifth lactation or more.

“Components are important to the milk cheque here and I, like many bull customers, am paid on a protein plus fat minus milk basis.”

Getting to the top

When the EBI replaced the relative breeding index (RBI) in 2001, Mr Flynn focused on buying the best bulls to lift the EBI value of his herd.

“Since then I’ve focused on fertility and protein within the herd and used fertile lines. I have used a lot of the Lakemead herd, which is fantastic, with some great blood lines.”

He believes the EBI €-ranking is the best marketing tool for bull buyers and commercial dairy farmers, which is why he’s keen to get back up the rankings.

To do this, cows must be bred to be fertile with good protein production. These traits are worth more than 50% of the index at 35% and 18.9%, respectively.

“If I see a heifer only doing 3.6% protein, I don’t expect her to improve and I sell her. In terms of yield, though, I know the Friesian is a slow starter so you have to give them two lactations before they crank the milk output, but you do get 10 lactations out of them. 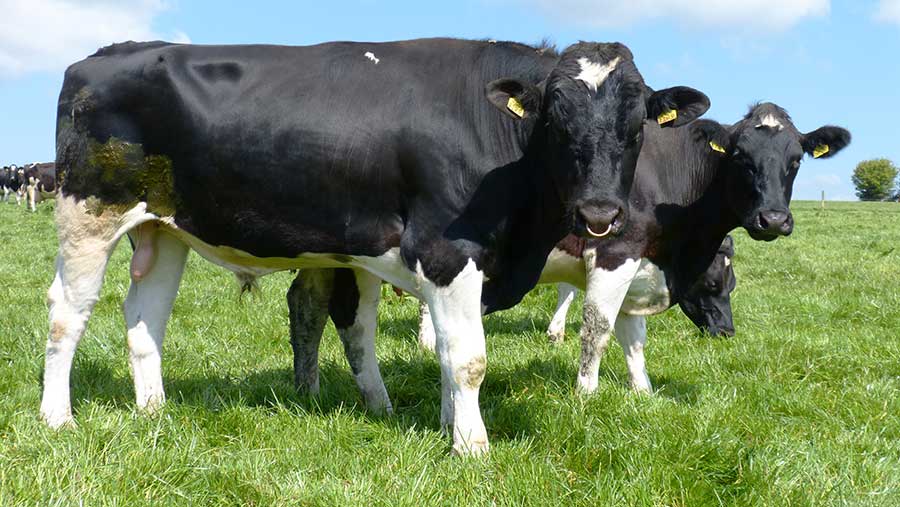 In 2016 Mr Flynn phased in Holstein by serving only 20% of the herd with Holstein bulls, with special attention paid to selecting mature cows and easy calving bulls. However, this year five Holstein-Friesian bulls have been brought in.

This year around 80% of the herd has been bulled with Holstein-Friesian (50-85%) with 20% of the herd (all heifers) remaining pure Friesian, but the Flynns stress it will be simple to switch back.

They hope to have bigger cows with a higher cull value of +€200 (£176) a head and more milk, while also keeping solids and fertility strong.

“We still have pure British Friesian clients,” explains Mr Flynn. “But my concern is the Friesian is getting too small with a reduced cull value and, from a marketing perspective, I have never known a bull or heifer buyer come to my yard and pick out the smallest animal.”

Type is one of the key things the Flynns are looking for when selecting their bulls, with moderate calving ease scores to avoid problems with heifers with narrow pelvises in the future.

“I don’t want light, narrow calves. Type is one of the most important priorities for me,” says Mr Flynn, who adds that he is also looking for EBI ratings, fertility, solids and milk.

“We don’t have problems with calving our cows and most heifers calve themselves. We breed cows to be efficient and easy to manage and this means I’m hoping I don’t need to feed these bigger cows more in the parlour, either.

This May the Flynns noted that the first crop of Holstein calves were six inches taller and six inches longer than the Friesians.

“This spring I had 80% of the herd served within two weeks,” says Mr Flynn. “That’s 70 cows with no synchronisation. We started bulling on 10 April for three weeks with AI only and on 8 May we had 90% served, with 40% on their first bulling.”

Cows are tailpainted blue and then painted red at first service. “Some cows repeat three days later but 95% of the time it’s because they weren’t actually bulling initially. She incorrectly displays heat as so many cows are bulling around her,” explains Mr Flynn.

“There’s also a trick to applying the tail cards on heifers. You have to wait half a minute or so for the glue to become tacky before sticking it on.”

Making the most from the grazing at Coolmohan is essential, although parlour cake is fed at the shoulders of the season at a budget of 1t a cow a year.

Winter feeding consists of chopped silage (8-10cm long) and up to 5.4kg of parlour meal, with no diet wagon or any mixed ration feeding.

“When spring comes we start them off with 3.6kg/day until May and then drop it down to 1.8kg, with nothing being fed through the middle of the summer,” says Mr Flynn.

Mobility and lameness are key breeding goals, with the sandstone tracks around the farm being the only regular lameness issue that might affect one cow a year.

Walking three-quarters of a mile up some steep hills to the 12-unit herringbone parlour promotes strong feet, which are checked and trimmed by Mr Flynn himself if problems do arise.

Somatic cell counts are also important but Mr Flynn explains he would rather do this with breeding than management.

“We teat spray in the winter but not normally in summer,” he explains. “At winter housing I start drawing the cows each milking but I don’t do this when they’re at pasture.”

Cows are given standing time to allow the teats to close post-milking, which he says reflects commercial practice.

“We think a black teat is a better, more robust teat, so we’ve started trying to breed that in. We’re also aiming for perfect teats pointing inwards so they are protected when she’s lying down.”

EBI is a single-figure index tailored to breeding cows suitable for Ireland’s climate and market. This is a cow that can produce 500kgMS/year with a 365-day calving interval. A bull rated €200 (£176) is predicted to be more profitable than a bull rated €150 (£132).