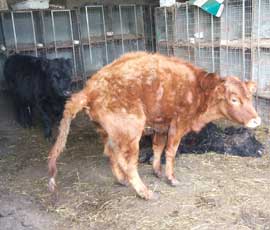 A Nottinghamshire farmer jailed for horrific animal cruelty has been banned from keeping pigs and cows for eight years.

Investigating officers from Nottinghamshire County Council Trading Standards had described scenes of cruelty and neglect to the animals at Littlewood’s farm as “the most horrific they have ever dealt with”.

The ruling at Nottingham Crown Court on Wednesday (29 February) disqualifies Littlewood from keeping, transporting or dealing in pigs and bovines until 2020. However, he will be allowed to continue to keep other animals, including poultry, donkeys and dogs.

Trading Standards Officers made an unannounced visit to White Haven Farm in March 2011 after they were contacted by a member of the public who was concerned about the welfare of animals.

* Rotting carcasses of scores of dead pigs, cows, poultry and a donkey in varying states of decay

* Starving animals with no access to food or water, some feeding on the carcasses of dead animals

* Animals left to roam the site in hazardous conditions

Four of the living animals – one cow and three pigs – were in such bad condition they had to be destroyed. Others have subsequently been put to sleep and others rehomed.

But no disease was detected as spreading as a result of the exposure of the animal by-products to other animals.

Nicola Schofield, trading standards manager at Nottinghamshire County Council, said: “The conditions animals were being kept in at White Haven Farm were the most horrific Trading Standards Officers have ever dealt with.

“When Mr Littlewood is released from prison we will be carrying out regular unannounced inspections of the farm to ensure he is adhering to the terms of the ban and meeting requirements for the animals he is allowed to keep.

“We will also be circulating information about the restrictions on Mr Littlewood to Trading Standards services at other authorities and livestock markets.”

Councillor Mick Murphy, cabinet member for Community Safety at Nottinghamshire County Council, added: “The condition in which Mr Littlewood kept his animals was not only appalling and cruel, it presented a serious risk to public health and we should be relieved that the consequences were not even worse.”