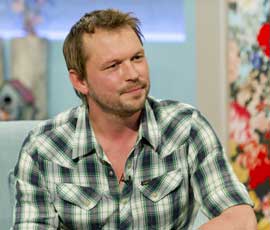 A television documentary is set to reopen the debate over the farming industry’s use of male dairy calves.

About 100,000 dairy calves were killed last year just because they were the “wrong sex”, new figures show.

An estimated one in five male dairy calves born in Britain in 2011 was killed on farm – and a further 11,000 were shipped abroad because they cannot produce milk.

The statistics, from the Calf Forum, set up by the RSPCA and Compassion in World Farming, were revealed as pig farmer Jimmy Doherty launches a new series about creating higher-welfare affordable food for Tesco, including British veal meatballs.

In the first episode of the brand new series – Jimmy and the Giant Supermarket – to be screened at 9pm on Channel 4 tonight (Tuesday), Mr Doherty will cover the issue of the fate of dairy bull calves.

He goes inside Tesco to come up with radical and innovative new ideas to produce equally cheap but higher-welfare alternatives to some of their best-selling meat products.

On the journey, Mr Doherty tackles the controversial issue of veal and included in the first of the three programmes is the alarming footage of three day-old bull calves being shot, as they cannot be used for beef or dairy purposes.

In the programme, he subsequently goes on to take in three Jersey bull calves to his farm to rear for rosé veal.

Mr Doherty said: “The reason these calves are shot is that farmers would lose money to rear the calves for conventional beef, so there needs to be a growing market for rosé veal to make this production viable.

“There have been a number of producers battling to try and get this product across to consumers – a number of restaurants serve it.

“If we eat rosé veal, everyone’s a winner, the calf, the farmer and the consumer.”

To tackle the numbers of calves killed on farm and the growing live transport trade, the RSPCA is working with supermarkets, the farming industry and animal welfare groups to create a market to keep male dairy calves here – such as rearing them for British veal.

Dr Julia Wrathall, head of the RSPCA’s farm animal science department, said: “Part of the solution to this problem is for more people to choose to buy British veal, ideally Freedom Food veal which is from farms, hauliers and abattoirs inspected to RSPCA welfare standards.

“When properly run and managed, veal calf rearing systems in the UK can provide animals with a good quality of life. Due to the diet and lifestyle of the calves, the meat produced under this system is darker pink, rather than very pale in colour and is known as rosé veal.”

Is Jimmy Doherty right to push the case for more consumers to eat British veal? Tell us your thoughts on our veal forum.