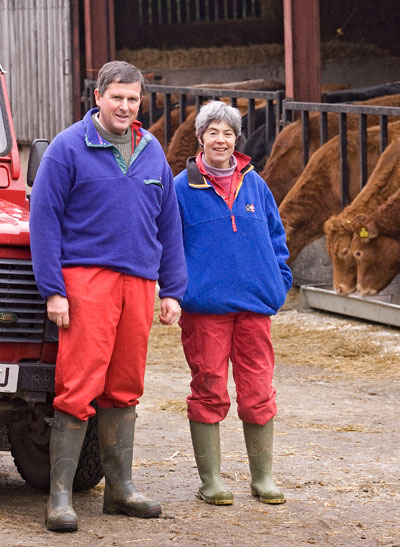 I cannot remember such perfect autumn weather. Our first frost was on 20 October which was exceptional as we have had them in August in the past. Generally mild, dry conditions, with just a little rain, has meant that stock have thrived without damaging the swards that are still growing well.

Only 40 miles east of here, in the border counties of Shropshire and Hereford, drought means that grass is desperately short and conditions can only be described as arid. Many farms have been unable to send their hoggs to wintering because there is no grass for them and stubble turnips have failed to germinate.

Both farms were tested clear for bovine TB. in October and we were very relieved. It is a time consuming and stressful operation to carry out a whole herd test and one can only feel for those people who are on sixty day testing. It is a huge disruption for them.

At the second Welsh mule sale at Welshpool, the Gower ewes sold well. Tom and Alex purchased “running” white faced ewe lambs at a similar price to last year. The new market is a pleasure to use. All sheep are scanned and a list is produced for both vendor and purchaser of the individual EID numbers. However it is impossible to be 100% accurate as the EID rules require. If the European Union was as keen on looking after their money as they are on enforcing EID they would not be in such a financial mess.