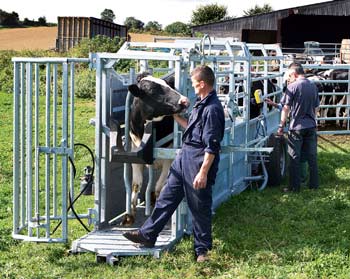 Routine heifer monitoring can help keep producers on target, says Kat Bazeley of Kingfisher Vets, Crewkerne, Somerset. “It does not matter what these targets are, as long as you stick to them.”

And a new heifer monitoring scheme from Kingfisher/Synergy has helped two dairy farmers do just that.

As part of the scheme, heifers are weighed about four times a year.

“We bring the weigh scale, crush and gates to the farm so we can use our equipment on its own or in conjunction with the farmer’s handling facilities,” says Ms Bazeley. And the weighing is carried out by one of the practice’s experienced para-professionals.

“We start by making a production plan with the farmer on what routine jobs they carry out with young stock and what they want to achieve, says Dave Frecknall, para-professional for Kingsfisher Vets. “The key is to tie in weighings with routine activities like vaccination.”

“We appreciate everyone is up against it in terms of labour but, when farmers know someone is coming to handle and weigh their heifers, they are more likely to do other tasks at the same time.”

Weigh results are collated and used to produce a farm-specific report, which is talked through between the vet and the farmer.

“In the past we used a weigh band at bulling and served anything at 360kg, but we had no idea how heifers were growing.”

When heifers were first weighed in March, we recorded an average growth rate of 0.5kg/day for stock aged between four and 18 months, says Ms Bazeley. “Ideally heifers should have been achieving about 0.75kg/day with as little variation as possible.”

“Pneumonia was a problem because calves of different ages were mixed together.”

Originally, calves were housed in mixed-age groups of about 40 animals; we now group calves according to age in groups of 20, says Mr Gillard.

“We are now able to keep track of performance and as a result we have seen a marked improvement in growth rates.”

Following these changes, a second weighing in July, following turn-out, showed an average growth rate of 0.92kg/day. There has also been an reduction in weight variation, says Ms Bazeley.

Before, when heifers weren’t “doing” we held them back, so we were calving between two and three years old, says Mr Gillard.

“Our aim is to calve everything at two years and with this system we can achieve it.”

Calving at two years is the most cost-effective system for rearing heifers, stresses Ms Bazeley. “Work carried out by Kingshay has shown it costs £183/head more to calve in at two-and-a-half years compared to two years.”

And heifer monitoring, will not only help with problem solving, but is also an added tool to help optimise efficiency, says Ms Bazeley.

The heifer monitoring system has helped Stuart Bacon of Honeydown Farm, Crewkerne stick to targets. “You don’t know where you are until you weigh,” Mr Bacon says.

“We are aiming to calve in at 560kg at two years old and, because we are autumn block-calving, it is essential heifers are on target to be at bulling weight on 26 November.”

“We always used a weigh band at bulling, but we found about 85% of heifers were on target. The question was whether we could tweak our system so the other 15% also made it.”

And the scheme has allowed under-performing heifers to be pulled out and managed accordingly. “In February, we pulled out nine heifers that were not on target and fed them hard so they could catch up with the rest of the group.”

For Mr Bacon, weighing is well worth the investment. “Each heifer is worth £1400, so I only need one heifer to last her first lactation to pay for the weighing.”