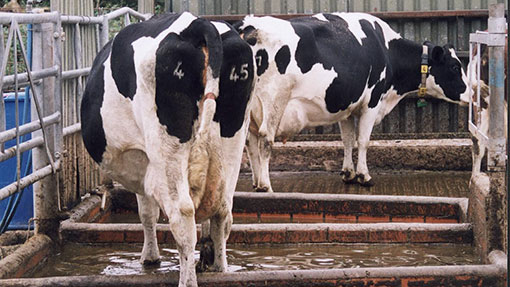 There is a massive gulf between scientific research into lameness and what is happening on farm, according to a leading animal welfare scientist.

A survey carried out by Queens University, Belfast, with 257 Northern Irish dairy farmers, found 79% of respondents used foot-bathing as a method to combat cattle lameness.

Nearly all of those questioned (77%) said they used copper sulphate, but a large proportion didn’t know the concentration they used.

Niamh O’Connell, from Queens University, described the findings as “worrying”. But she blamed the fact there has been little research done to instruct farmers what is the best mixture to use and at what concentration.

Almost half the farmers surveyed also used an additive such as salt or washing-up liquid. However, she said yet again there was no evidence to prove their effectiveness.

Speaking at the Cattle Lameness Conference, Worcester, on 7 May, she said research is desperately needed to address these “real world” questions, such as the impact of leaving solutions to stand for varying lengths of time and the impact of faecal contamination.

Studies undertaken by the university to assess the efficacy of varying concentrations of copper sulphate foot-bath solutions found higher concentrations of the compound were more effective in treating digital dermatitis (DD) in severe cases.

Results showed that reducing the concentration of copper sulphate solution in the high-prevalence group was less effective.

However, in the lower-prevalence group both the 2% and 5% copper sulphate solutions were effective in reducing active lesions, explained Dr O’Connell.

“With a lower-prevalence herd a 2% solution every 14 days could be used [over four consecutive milkings], proving a very proactive lesion management took place,” said Dr O’Connell.

A follow-up study looked at the effect of extending the interval between foot-bathing.

In both instances, extended periods of treatment led to a reduction in the effectiveness of DD control.

There were more issues with the cows treated every 14 days, explained Dr O’Connell.

“[In the lower-prevalence group] more animals had no lesions in 14 days as opposed to the monthly treatment.

“So it shows you the interval between foot-bathing is important. It does make a big difference to the levels of digital dermatitis,” added Dr O’Connell.

The active of choice for many farmers is set to be banned from all livestock foot-baths, warns one specialist

“It is currently used on 98% of dairy farms, being a useful and cost-effective active for reducing foot pathogens, says Alison Clark, Rumenco’s product manager for dairy hygiene.

But new EU rules will see it no longer being used for livestock foot-bathing. “While the timing is still to be confirmed, our suppliers say it is only a matter of months.” The firm is to launch an alternative based on glutaraldehyde plus QAC biocides at the upcoming Livestock Event.