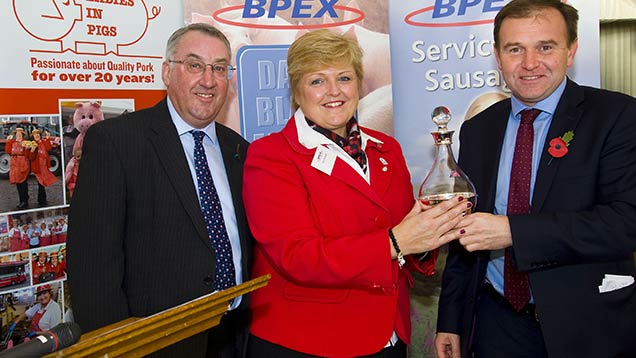 Described by the judges as legends of the British pig industry, it is only the second organisation ever to win the award in its 54-year history.

The David Black Award is given to a person or organisation that has made a significant contribution to the pig industry, and the list of achievements for Ladies In Pigs is impressive.

“They can be seen at rural shows, international foodie events and outside supermarkets extolling the virtues of British pork. From their BPEX-sponsored ultra-modern and striking pink mobile kitchen, they cook and serve fantastic pork recipes to the British public of all ages,” said Mick Sloyan, director of BPEX, speaking at the awards ceremony held at the House of Lords on Tuesday.

With 300 members involved in more than 100 events each year, Ladies In Pigs has come a long way since its humble beginnings in the early 1990s. The organisation was set up by Glenda and Miranda Shufflebotham to promote British pork, after Glenda heard farmers complaining about poor prices.

“It is a real honour for us to be recognised by the industry, but it really has been a tremendous team effort and once the members realise the magnitude of it, I’m sure they will be absolutely delighted,” said Ms Woodhall.

Describing their achievement as a “complete shock”, Ms Woodhall explained how they attended 75 county shows, communicated with more than 60,000 consumers and cooked 1.5t of Red Tractor pork last year.

“It is an immense amount of work, but communication is at the heart. The award is the highest accolade and it will drive us harder to promote British Red Tractor pork as a versatile product,” she added.

Award winner Sue Woodhall is pictured above with Stewart Houston and George Eustice.