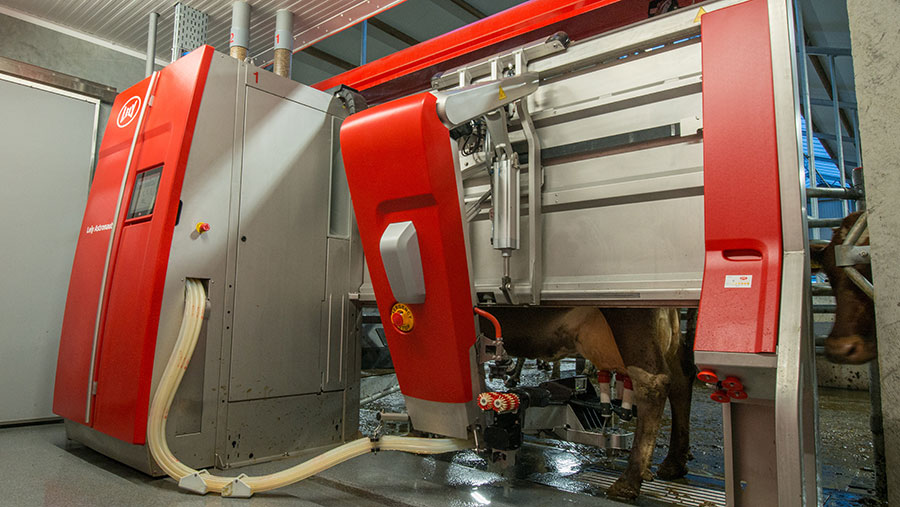 The Astronaut A5 milking robot now comes with an “arm” that follows a cow’s movements during milking and adjusts to remain close to the udder.

Lely says this means faster milking, and tests carried out by the company across 30 farms and more than 2m milkings have revealed a 20% reduction in energy use.

Other new features include better hygiene thanks to a teat detection system that scans the udder post-milking to allow more accurate spraying.

The machine’s user interface has also been improved so that relevant information is on a single screen, with daily maintenance tasks available at the click of a button.

Lely’s improved Juno feed pusher, which will be on the market in late August, is versatile enough to be used in almost any shed without modification, according to the maker.

It works by following walls and fences, with metal guide strips directing it towards a charging base as well as other sheds.

The improved Juno can now run outside and between sheds, thanks to its ability to lift its skirt to overcome obstacles; this feature also helps give good ground clearance on hills.

There’s a collision detector, so any accidental knocks from animals or humans shouldn’t stop the Juno in its tracks, and a light on the top means it can operate outside at night, too.

Meanwhile built-in Bluetooth allows the Juno to automatically open and close barn doors, and enables the farmer to operate it via a smartphone if required. A light on the top means it can operate outside at night, too.

There’s a collision detector which can be fitted with a harmless electric pulse to prevent cows from stopping the robot if they come into contact with it.

Prices for the Astronaut A5 milking robot and Juno feed pusher are available on request from the dealer.