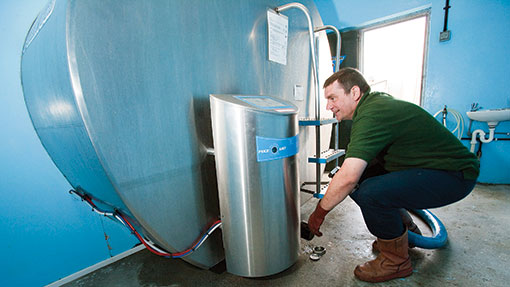 Across the EU, the fight to stamp out BVD is already under way. Aly Balsom looks what is being done in Denmark and the Netherlands and what the UK can learn.

Knowledge transfer and making eradication compulsory appear to be the driving factors to successfully getting rid of bovine viral diarrhoea (BVD).

Having eliminated BVD from infected herds, Denmark is a shining example of how a co-ordinated and focused approach can bring big gains in a relatively short period.

See also Identify, treat and control BVD in your herd

Its focus on communicating to farmers and offering financial support seems to have helped Denmark wipe out BVD in infected herds where other countries, such as the Netherlands, have not been as successful.

The fight to eradicate BVD in Denmark started in 1994 with a voluntary national programme introduced by The Danish Cattle Federation – an industry-driven organisation. The programme then became compulsory in 1996, with all originally infected farms achieving BVD-free status in 2007.

What did it involve?

Dairy farmers were provided with free, quarterly bulk milk testing to establish their status. Beef farms had to pay for their own initial screening. Any farm wanting to eradicate BVD then had to pay for further testing themselves.

To help further drive uptake on to the programme, beef farmers were later told if they had a persistently infected (PI) animal on farm they could only send it direct to slaughter, explains JØrgen Katholm, senior adviser for the Danish Cattle Federation.

“In 1996 we made the programme compulsory. That meant any farms with a PI had to get rid of them by law,” he says. “At that time, 7% of dairy farms had a PI, compared with 50% at the start of the initiative. We had to make it compulsory to achieve full eradication.”

Farmers were also offered financial support to slaughter PI animals. Vaccination has never been used as part of control.

Currently, Denmark only has one newly infected farm with a PI and hopes to receive BVD-free status within the next six months on this premise.

Why has it been so successful?

Communicating the effects of BVD and the benefits of control were a key focus of the programme from the start. Organised by vets and farmer organisations, farmer meetings were crucial to achieving strong buy-in to the initiative.

In less than two years, 80-90% of beef and dairy farmers were involved in the initial voluntary programme. Mr Kotholm believes free bulk milk testing was also a key driver to the success of the initiative by creating greater awareness.

The Netherlands – a work in progress

The Netherlands introduced a voluntary BVD control programme in 1998. At the time, national eradication was not the aim, but discussions are under way on how a national programme could work.

The initial programme was instigated by the country’s Animal Health Services, which is a privately owned organisation influenced by the farming industry.

What did it involve?

A farmer can choose to eradicate BVD on his farm by working with his vet. Tests will be carried out to establish status. If animals are shown to be exposed to the disease they will be tested and all PIs culled.

Ongoing testing is carried out to determine when a herd is free of BVD and to ensure it remains free. All bought-in animals will be tested and quarantined. Vaccination may be undertaken.

Last year, 5,000 of the 17,000 (29%) dairy farms in the Netherlands were involved in an eradication scheme and a further 2,000 dairy farms were undertaking quarterly bulk milk surveillance testing.

Between 2004 and 2008 there was no significant decline in BVD. In 2004, 26% of dairy herds were estimated to have been exposed to BVD, along with 34.3% of beef farms (including smallholdings). In 2012 this had dropped to 12.7% of dairy and 21% of beef. This may have been influenced by a greater uptake in BVD vaccination along with the voluntary programme.

Why has it not been more successful?

Vet Linda van Duijn, from The Animal Health Services, believes that if the Netherlands wants to eradicate BVD nationally, the programme has to be compulsory.

However, a re-shuffle of the Dutch agricultural boards means it is not clear who would take charge.

“I hope we will find a way with a new organisation, but it’s uncertain,” says Miss van Duijn.

“It would help if there was better knowledge transfer. BVD is not something you can easily see and many are unaware it’s on farm.”

A national eradication programme is currently being talked about by LTO – the Dutch Federation of Agriculture and Horticulture.

Legislation is vital in the fight against BVD in the UK

BVD has been successfully eradicated from a number of EU countries and national control programmes are well established in various member states. Common themes of successful national programmes include: