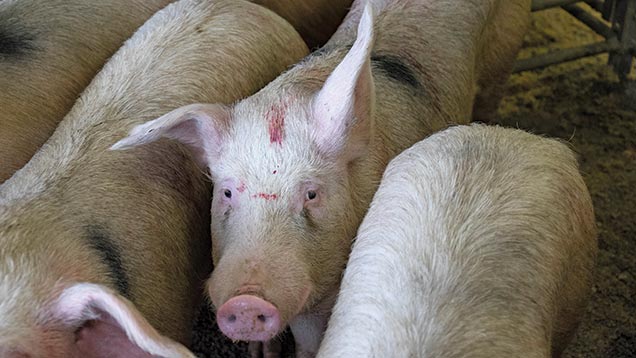 Feeding pigs a liquid diet results in a higher finish weight, but a lower killing-out percentage than pigs fed on dry food, according to trials carried out at the Agri-Food and Biosciences Institute at Hillsborough, Northern Ireland.

Research by the institute and Devenish Nutrition in Belfast found the carcass performance of pigs offered dry feed was up to 8% better compared to pigs offered liquid feed.

“Using only live pig performance, it could be concluded there was little difference in pig performance when feed was offered in dry or liquid form,” the research team said.

“However, when examining the carcass data it is clear pigs offered dry feed had a better kill-out percentage, which would suggest pigs offered liquid feed had a heavier gut, perhaps driven by the higher feed intake.”

The trial was carried out across two time periods and involved a total of 360 pigs with an equal gender split, which were penned in groups of 15.

The pens using dry feed were interspersed randomly among those using liquid feed to eliminate any effects of position in the room.

The feed was prepared in both meal and pellet form. The pellet form was offered as dry feed, ad lib through single-space feeders and the meal form was mixed with water in a 3:1 meal-to-water ratio and also offered ad lib. The average dry matter of the liquid feed was 234g/kg.