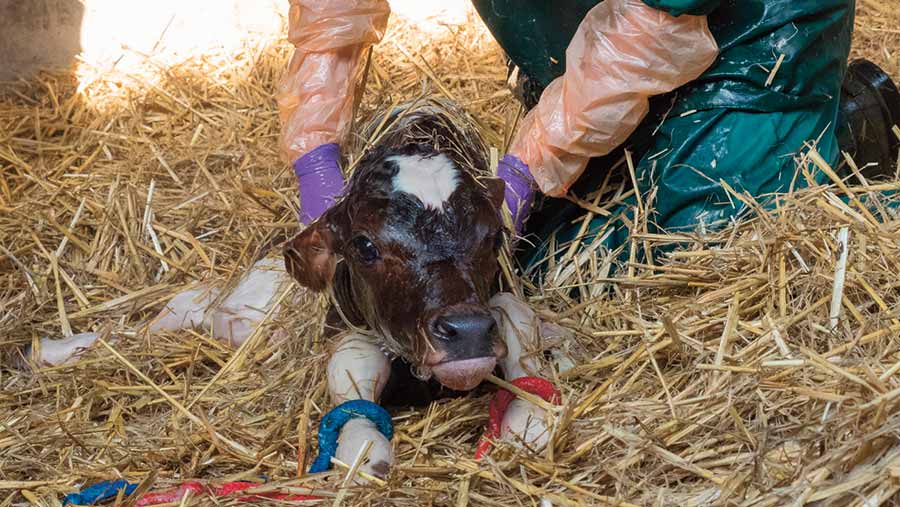 The Irish advisory body Teagasc points to an uplift in profit for every percentage point increase in the six-week calving rate.

While genetics play a role in fertility, it is year-round herd management practices that have the biggest impact.

See also: Autumn or spring block calving – which is best?

Monitor liveweights of youngstock to ensure they are on course to achieve target weights – aim for 60% of mature weight at mating.

Hitting the right weights will give them the best possible chance of getting in-calf earlier.

Calving heifers at the start of a calving block will allow adjustment to their transition to milking animals and minimise stress, which in turn will aid conception rates.

Poor body condition at calving is the biggest culprit for curtailing reproductive performance.

The key is to dry off cows with enough time to gain sufficient body condition by calving; resist the urge to milk for too long.

Body condition score (BCS) the herd four times a year to identify underweight stock early; these can be preferentially fed to achieve targets.

Cows should be showing good heats even prior to breeding season. If not, it could be related to a nutrition problem.

Cows must adjust to their diet before serving, with feed consistency and sufficient energy content two key factors.

Four to six weeks on a consistent diet is recommended, either on silage or on grass, as long as the grass is good quality and has sufficient energy.

If not, consider feeding concentrates to increase energy levels because ovulation is enhanced by a rising plane of nutrition.

In an autumn calving system, cows are expect to bull in October/November, but until they are housed they will be eating grass that is decreasing in nutritional value.

Detection aids are important tools, but don’t be wholly reliant on technology; nothing beats a good set of eyes, three or four times a day for 20min a time.

The best time to observe heat is when cows are settled, not when they are being walked back to the field after milking and thereafter as they will be eating and not showing normal bulling behaviour.

Schedule specific times to check cows and regularly monitor the information; this is critical for spotting trends early.

A lot of evidence suggests peak bulling time can be between 10pm and 6am so look for visible signs such as mucus under the tail or rubbing of the coat.

Ensure the AI programme, facilities, staff and technician are all supported to produce good results.

Breed replacements from the most fertile cows; all replacement heifers should be served in the first three weeks of the breeding season.

If an animal doesn’t hold to the first service, use beef semen on the second or third cycle.

6. Issues relating to cows not cycling

Carry out pre-mating heat observations so the non-cyclers can be identified.

Treat non-cyclers early so they have more AI mating opportunities than non-cyclers treated in week three of mating.

Use an animal health plan that targets the prevention of diseases that impact on reproduction, such as metritis and mastitis.

Metricheck the herd so uterine infections such as endometritis can be identified and treated before mating. Check the herd’s trace element status.