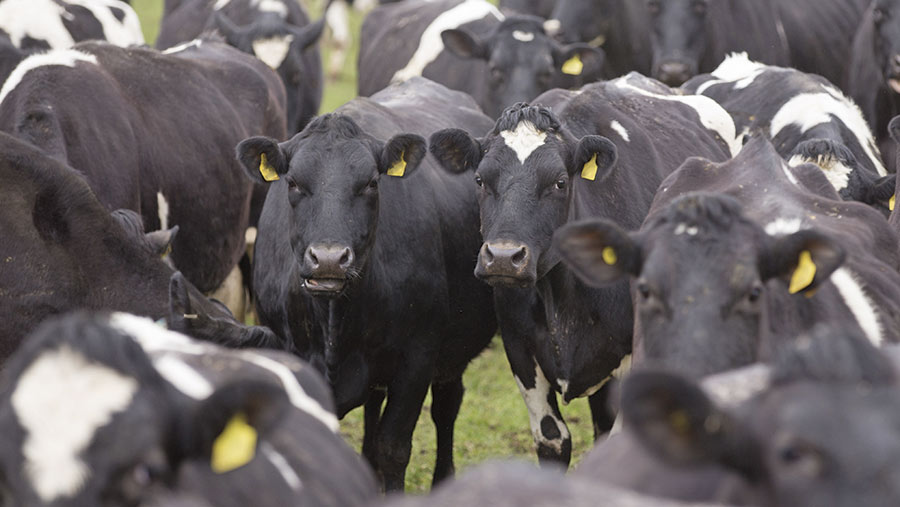 All-year-round calving systems can be very profitable but, if not optimised, users may benefit from the efficiencies and focus of switching to autumn block calving, believes AHDB Dairy.

See also: How to budget for the switch to autumn calving

Instead, they are being encouraged to breed and manage for fertility and quality forage production to maintain a tight calving block.

Read the advice on what to consider in your buisness, an autumn block calving Q&A with dairy consultants and a case study on one farmer who made the switch to block calving.

How will I manage calf rearing?

RD: If you are weaning at 12 weeks old it may be time to look at weaning at 10 or eight weeks because you will need space for all your calves to be on milk. (See point 7)

Pressure can be completely taken off by having heifers reared on contract on a neighbouring farm, selling younger, increasing calf growth rates to wean younger, or having heifers contract reared until a shed is erected.

Will I have to get more staff?

RD: Staffing will increase at calving but some farms will find that current staff levels are sufficient as the batch system brings efficiencies, although some farms get in an extra worker for three months calf rearing. (See point 6)

Specialising may help, for example have designated calf rearers and a grassland manager, herd manager and someone trusted with machinery. (See point 8)

How quickly should I get in the block?

TE: It can be done in one year but some manipulate calving dates, doing it in three to five years. The quicker the better as this means you are getting any cost-saving and lifestyle benefits sooner. Short-term pain for long-term gain should be the mindset.

Sell and buy back is the simplest option, but you need to identify correct replacements from as few sources as possible to reduce the biosecurity risk.

What will manipulating calving dates cost me in milk?

It can be important to keep cows milking rather than drying them off. If cows get fat they could lose their vigour to breed.

What is the cost of leaving cows open?

WJ: If we assume 25% of the herd already fits a three-month block from a true AYR calving herd, the remaining 75% will need to have lactations extended by up to nine months in order to fall back into the front of the block.

What cows do I need for block calving?

TE: Farms with Holstein-Friesians may have to use Friesian bulls to breed more fertile replacements that will hold body condition better. However, some fertile Holstein families will manage it. Attention must be paid to condition and transition. (See point 9)

Many farms that have made the switch have used crossbred or Friesian genetics from Ireland on the EBI (economic breeding index) or the New Zealand breeding worth index. Your options are more open with autumn than they are for spring calving.

Since switching from AYR calving to ABC the Hendries at Purroch Farm have cut concentrate by 40% and quadrupled milk from forage (MFF) to 3,500 litres.

They focused efforts on improving grass utilisation and silage quality and are now targeting 4,000 litres from forage, feeding a TMR combining homegrown beet and crimped wheat.

At spring turnout, the farm sees a 1.5-llitre a cow/day production lift, explains Wallace Hendrie, who farms with brother James, Uncle Robert and father Jimmy near Hurlford, Kilmarnock. Wallace got the confidence to switch to block calving through his Nuffield scholarship and work with the Nuffield Dairy Group.

As cattle dealers who were able to simultaneously start a spring-calving unit on neighbouring Millands Farm, the Hendries were ideally suited to make the switch as they could roll cows between calving blocks.

Purroch, the farm with the heaviest land, was already feeding a total-mixed ration and could house cows from calving in August, which took pressure off pasture when conditions are wet, explains Wallace.

The calving pattern was achieved by selling cows that didn’t fit either the spring system at Millands or the autumn system (12-week block from 1 August) at Purroch and rolling cows around between the two farms as necessary.

Experienced spring calver Tom Rawson was employed as a consultant. He told the Hendries that paddock grazing would grow 28% more grass so they would need 28% more cows, Therefore they have increased the herd from 220 to 300 cows.

Extra calf rearing space was made by reconfiguring pens. Calves were previously in single pens until weaning, but are now batch housed from 1-2 weeks old in groups of 12.

The Hendries also switched processor from First Milk to Muller on a liquid contract as this allowed them to be nearer to processing plants in their region and increased their milk price. Autumn-block cows average 4.32% fat and 3.5% protein.