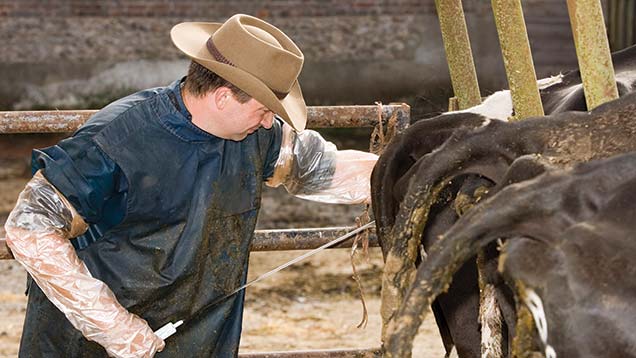 An expert in cow fertility says an average calving interval of less than 400 days is achievable in all dairy herds.

Tom Chamberlain, who is working with Farming Connect on an initiative to improve dairy herd fertility in Wales, says for every extra day in the calving interval there is a £2.90 a head loss to the business, mainly from lost milk production.

He describes poor fertility as one of the most significant losses to dairy businesses because of milk yield losses, higher culling rates, fewer calves born, more disease problems around calving and disrupted herd replacement policy.

“Every dairy farmer knows how important it is to get cows back in calf as quickly as possible, but poor fertility is still a major cause of production losses on many farms,” says Dr Chamberlain, who advocates monitoring and target setting to underpin improvements in fertility and profitability.

“Reducing the herd calving interval is a massive step towards becoming more efficient.

For every day a cow’s calving interval is extended, her next lactation is also postponed.”

Through Farming Connect dairy fertility benchmarking groups, he is working with dairy farmers in Wales to examine the issues that affect herd calving intervals, which range from heat detection to diet.

The majority of farmers in the groups have year-round calving patterns.

See also: Calving interval may not be best measure for dairy cow fertility

Dr Chamberlain says benchmarking allows the farmers to compare their fertility parameters with those of others in the group and pinpoint weaknesses in their own systems, such as poor heat detection or a high number of services/conception.

Benchmarking each herd over time also allows improvements to be tracked and pinchpoints identified for targeted attention, adds Dr Chamberlain.

“Previous work with similar herds has shown that on two-thirds of dairy farms, fertility is the biggest area for improvement. They can identify where that £2.90/day loss could be retrieved.’’

The longest calving interval among the 18 participating farms is 458 days and the shortest is 385 days.

Dr Chamberlain says a major area of focus is the link between nutrition and fertility. “Energy intakes at all stages of lactation and associated body condition score changes are key,” he says.

He recommends drying off and calving at body condition score (BCS) 2.5-3.0 “Cows should be fit, not fat. On many farms, overconditioned stale milkers are linked to long calving-to-conception intervals. Where cows take a long time to get back in calf, they can put on too much condition in late lactation.

Farming Connect is a Wales-wide service funded by the RDP and Welsh government. As part of the series, Farmers Weekly will regularly be visiting different Farming Connect demonstration farms to find out what projects have been undertaken and how performance has improved.

“As a rule of thumb most units will struggle to avoid overfeeding cows with a daily yield of less than 0.2% of their lactation yield. So for a cow predicted to yield 8,000 litres in 305 days, the threshold is 16 litres/day.”

Most dairy cows suffer a period of negative energy balance in early lactation because their energy requirement to support milk production is greater than their energy intake from the diet.

This is due to low feed intakes in the weeks after calving and intakes are more depressed in overconditioned cows.

As a consequence, body fat is mobilised to make up the shortfall in energy supply and cows lose body condition through the early lactation period.

“If too much fat is mobilised – more than 0.75 BCS units – the liver is flooded by the circulating fatty acids and liver function declines.

Changes in milk composition can offer some pointers to energy mobilisation. In typical Holstein Friesian herds, individual milk butterfats of more than 5% at the first recording date suggest the cows have mobilised too much fat around calving.

This is generally due to cows being overconditioned at this stage. This isn’t the case for all herds, but the milk recording data can generally offer some simple monitoring, says Dr Chamberlain.

One of the farmers involved in the fertility benchmarking initiative is Rhys Lougher, who milks 100 high-yielding pedigree Holsteins on a year-round calving system near Bridgend.

His calving index is 450 days and the average number of services to conception is four, but with cows producing 40 litres of milk a day and sexed semen used across the entire herd, fertility does come under pressure. “Our cows are working hard,” Mr Lougher admits.

Since joining the group he has increased routine vet visits from once a month to fortnightly and is more focused on heat detection.

“In small herds it can be difficult to justify a vet visit for fertility work, but fortnightly visits have made a big difference – they help us keep on top of things,” says Mr Lougher, of Ty Tanglwyst Farm.

Heat detection is another area where he is making improvements. “We are dedicating more time to detecting when cows are bulling. It has become a big focus for us.”

“It is easy to let fertility slip. In a block-calving system you can be very focused for a relatively short period of time and fertility is easier to monitor. But it is not as simple if you are calving all year round.”