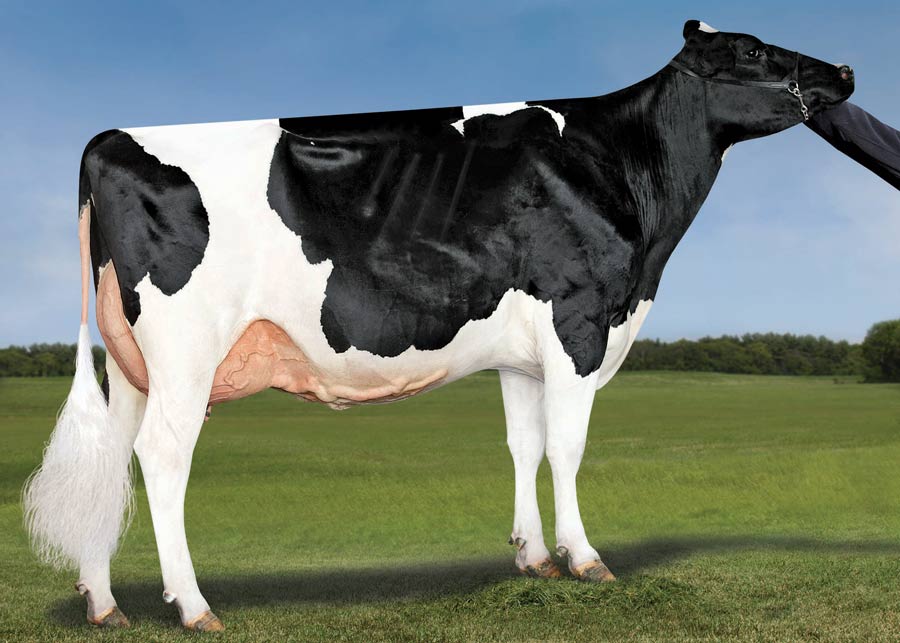 Young genomic sires are proving their ability to perform, making up the entire top 10 of proven Holstein sires in the August bull proof run released today (13 August) by AHDB Dairy.

Brook has the highest Profitable Lifetime Index (PLI) of all the proven bulls at £794, reflecting the high fat and protein percentages in his Predicted Transmitting Ability (PTA), at +0.23% and +0.12%, respectively.

He combines this with breed-leading udder health figures (-40 SCC, -5 Mastitis), reflecting the significant emphasis placed on these traits in the Nordic countries over many years.

The familiar name of Co-op Robust Cabriolet features in third place, now with 684 UK daughters contributing to his production figures.

“Every one of these daughter-proven bulls has graduated at some point from the young sire genomic ranking, each bull helping to build confidence in the UK and international dairy sire proving systems.

“They serve as a reminder that genomic evaluations are proving their value, as one tranche of young sires follows the next into the proven rankings.”

The number one proven Holstein sire, VH Balisto Brook, also leads the new Autumn Calving Indexes and features in the top five for Spring Calving Index (£SCI) with an £ACI of £668.

Brook is the first of 10 Holsteins to take the top 10 places on this across-breed ranking, designed to pinpoint the sires which transmit economic superiority in a typical autumn block-calving, winter-housed, UK situation.

£ACI and £SCI are calculated across all dairy breeds, allowing each breed to be compared on a completely level playing field, and helping those crossbreeding to fairly assess the sires most suited to their system.

Remaining in second position is Teemar Shamrock Alphabet, whose exceptional daughter fertility and lifespan are combined with lower maintenance costs than most of his cohorts, to earn him an ACI of £647.

Also with an ACI of £647 and with equal second ranking is the newly proven Siemers Bloomfield.

He excels for both weight and percentage of fat and has good fitness across the board. He also has the highest Type Merit amongst the top 10 £ACI sires.

Producers forward-buying for the spring calving season have a slightly different mix of leading sires and a broader mix of breeds from which to select at the top of the £SCI ranking.

In third place is the leading Jersey in this ranking, Danish VJ Tester (£SCI 471), who brings the high milk quality typical of the breed, with lower volume than his cohorts.

Equally typical for the Jersey breed are the low maintenance costs of his daughters, who also feature good fertility.

There are two new front-runners among the breeds other than Holstein in the Profitable Lifetime Index (£PLI) ranking.

The British Friesian breed’s new number one is Lakemead Jingle, whose PLI of £521 lifts him from fourth position. This high-production son of Pinnacle also transmits good daughter fertility (+5.4) and lifespan (+0.4).

Jerseys also have a new front-runner, as Danish VJ Tudvad moves up from third position, with a PLI of £508.

This high milk quality bull also stands ahead of his closest rivals for reduced cell counts and mastitis (-28 and -4) and improved daughter fertility (+9.2).

There’s no change in the number one position for the red and whites, with VR Nivalan Fimbe Faabeli retaining his lead at PLI £644.

A tie for the number one position and three new entrants to the top 10 indicate the vibrancy in the £PLI ranking for young genomic Holstein sires.

The Denovo prefix – a joint creation between ABS Global and De-Su Holsteins – has taken equal first place and features five times in the top 10.

Their number one bull is Denovo 8084 Entity, which moves up from sixth position in the April 2019 listing and features a massive Predicted Transmitting Ability for fat of 48.4kg alongside the expected superb daughter health and fertility traits which are characteristic of the high £PLI bulls.

He also has excellent calf survival (+2.7) and maternal calving ease (+2).

Tying in first position is Bomaz AltaCabot. He also transmits high fat (44.7kg) and good maternal calving ease (+2.1), while excelling in udder health (-28 SCC and -4 Mastitis) and lameness advantage (+2.8). The PLI of these joint number one bulls is £871.

With a Type Merit of +2.5, Appeal ranks as the highest type sire in the top 20 and has impressive daughter fertility (+12.8).

Atrium also transmits very good fertility (+11.9) and has an outstanding maintenance score at -12. Both are sons of ABS Achiever.