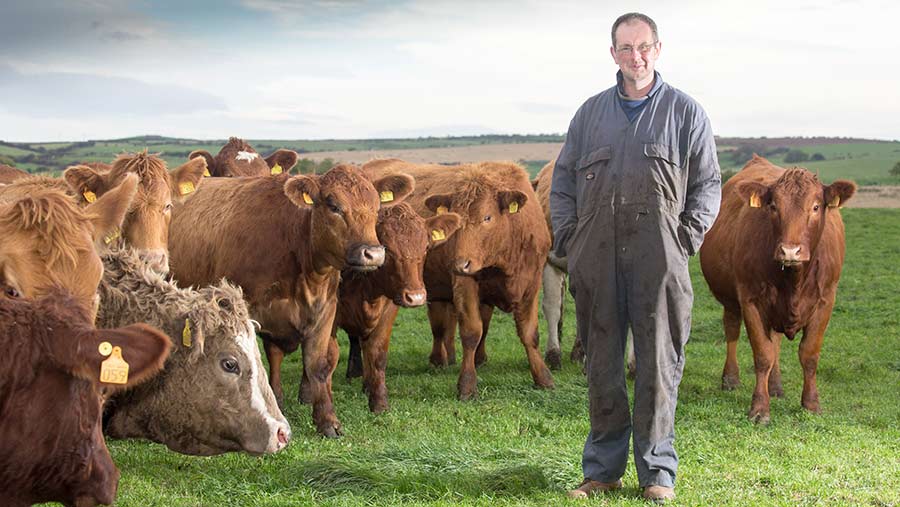 Grassland management and genetics are key focus areas for tenant farmer Guy Prudom, who wishes to reduce his cost of production/kg of liveweight from 328p/kg to 250p/kg.

Mr Prudom runs a commercial spring-calving suckler herd and arable enterprise on the edge of the North Yorkshire Moors.

Mr Prudom and his father Peter operated as organic farmers between 2007 and 2015 but have returned to conventional farming and are experimenting with crossbreeding over a Simental-cross cow.

They felt that organic premiums were not sufficient and stocking rates were a limiting factor, with the farm unable to provide enough muck to support soil fertility.

Angus and Simmental bulls will continue to be used, but more recently the Prudoms have bought a number of Stabiliser heifer replacements and two bulls.

Through consultation with the AHDB and independent consultants, led by farm business consultant Ian Cairns of Agrifood Technical Services, the Prudoms have identified five key performance indicators (KPIs) they can improve to help lift herd performance and profit.

“We became a strategic farm because expanding the arable side is difficult here and we need to improve the efficiency of the cattle, grassland management, genetics and feeding,” says Guy. “We’d like to finish more heifers in spec and make better use of data to cull cows not pulling their weight, and make the small year-on-year improvements that will leave us with the most efficient and hard-working cows.”

Cost per kg of beef produced

Mr Cairns says the first step will be to maximise the total liveweight kg of calves weaned, thus sharing the fixed costs of the beef enterprise over more sales income.

“Future Strategic Farm meetings will enable us to consider strengths and weaknesses in the Farmbench figures then identify practical actions that can be taken to improve performance,” Mr Cairns explains.

To increase the number of calves born alive, a key area will be reducing barren rate, currently at 11-12%.

Mr Prudom will source every bull on EBVs and semen test them. The whole herd will continue to be put through a health plan with Clevedale Vets, vaccinating for IBR, BVD and leptospirosis.

Measures to improve this are already in place, following a sub-fertile bull last year (missed 14 of 42 cows) and a case of IBR that lead to eight aborted calves in 2015.

IBR vaccination has been in place ever since, after the abortions lifted the ‘born dead’ rate from 3.5% to 8.5%.

Meanwhile, fertility on the dam side will be managed by monitoring BCS score and feeding straw in the ration as appropriate.

Herd records are managed through FarmPlan’s Cattle Manager software, which Guy says lacks the ability to record and track BCS and cow efficiency.

“This is where Cattle Manager lets us down,” says Guy. “Cow weights are going into Cattle Manager, so it’s just a case of it being able to calculate the percentage of weaned calf weight against each cow.”

Calf mortality is below average at Northfields at 1.5-2% (average = 4%, AHDB Stocktake report, 2016). Mr Cairns believes the greatest improvement in calves weaned will come from having more calves born alive.

“Fertility testing all bulls every year and working with the vet on health plans and vaccination protocols will help,” he adds. “Liver fluke has surfaced as an issue recently so managing that appropriately with the right actives at the right time will also be important.

“Annual BVD herd testing and tag and testing calves is providing dividends. Managing BVD seems to be keeping other health issues at bay.”

Calves average 286kg liveweight (range 180-390kg) at weaning, with a range in cow efficiency between 24%-57% and calves hitting daily liveweight gains of 1.22kg/day on average.

Average cow weight is 651kg+ within the herd and overall weaning efficiency rate is 44% with calves weaned when they are 198 days old. 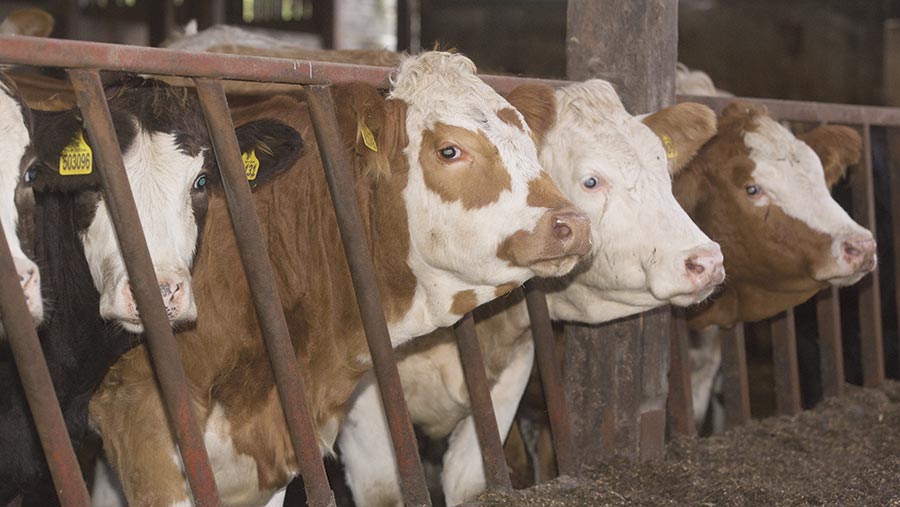 “Cow efficiency will be improved by monitoring cow size and weaning weights as well as boosting grass through a paddock grazing system,” Mr Cairns says.

“Moving away from the continental-cross and into the Stabiliser should help moderate cow size and, alongside better-quality grass, may see weaning weights hold or even improve slightly to lift cow efficiency.”

To improve grass quality and utilisation Guy Prudom will transition from one-week shifts between fields to a trial paddock grazing system, splitting 24ha into nine paddocks for a group of 50-60 cows and their spring-born calves. 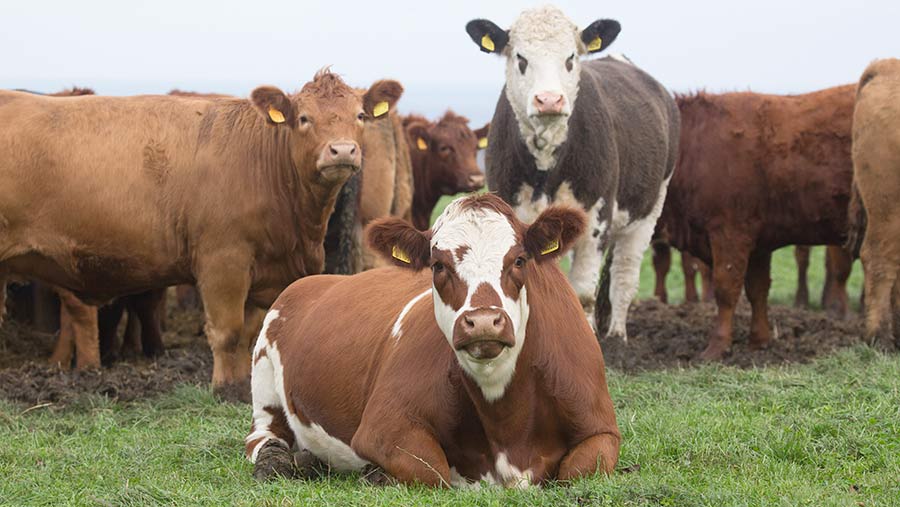 Grassland productivity has been helped by soil testing every three years, and applying lime to lift pH levels from 5.5 to 6.5. Grass measuring with a plate meter and recording on Agrinet will also be implemented.

Mr Cairns says: “This could be one of the quick wins we see. It won’t cut fertiliser bills but it could lift calf DLWGs because it will increase the quality and consistency of dry matter available to the calves.”

An issue with overfat heifers (4L) has meant about 50% have been out of specification.

Currently, heifers calve at 24 months in six to seven weeks and cows calve in 10, but the aim is to shorten the cow calving block by two weeks to improve calf uniformity.

More attention will be paid to straw inclusion rates in the rations and managing homegrown proteins, which includes wholecrop beans and red and white clover from the farm’s organic days.

We’ll re-visit the farm within the next 12 months to document their progress.