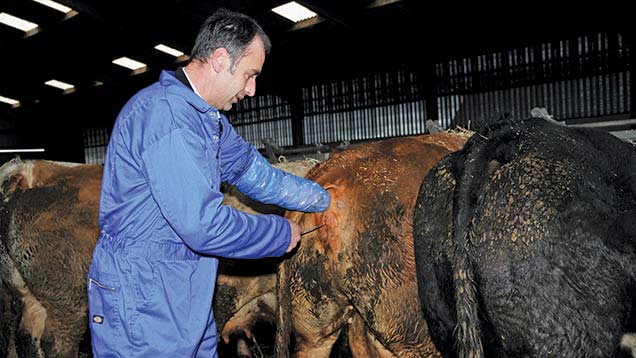 Planning ahead and ensuring cattle are on a rising plane of nutrition has helped Will Dickson achieve 92% conception rates in his first year of using synchronised AI on maiden heifers.

Having decided that AI was the best way to drive genetic gain in his herd of predominantly Aberdeen Angus-sired suckler cows, Mr Dickson turned to vet Keith Cutler of the Endell Veterinary Group for advice.

They decided on a progesterone-based synchronisation programme to help calve maiden heifers two weeks before the main herd of spring calving cows.

Mr Dickson started to plan well in advance to ensure heifers were in the right condition and an AI technician was booked in to serve at exactly the right times.

“I specifically kept some grass fields near the buildings for the heifers as they were ideal to ensure heifers were on a rising plane of nutrition prior to service,” says Mr Dickson from Wick Farm, Downton, Salisbury.

An existing handling systems from when the farm was a dairy also meant Mr Dickson was confident heifers could be handled calmly.

“Minimising stress was a main focus because if you can handle cattle quietly, it’s better for conception,” he says.

Bulling heifers were selected in January/February. This group was then given preferential treatment and kept in a specific smaller group and fed more silage during housing. They then went out to good-quality grazing leys at the end of February and were put on the fields close to the buildings prior to insemination in April.

Mr Cutler explains how a progesterone device was implanted for 12 days with a prostaglandin injection given on day 11.

“Giving the prostaglandin injection allowed me to check that all the devices were still in, which they were,” he says. “Will could then pull the devices out himself on day 12.”

Fixed-time AI then occurred 48 and 72 hours after the devices had been removed, with 22 out of the 24 heifers pregnant after two services. Mr Dickson says ensuring the AI technician was lined up well in advance was crucial to the success of the programme.

“The technician asked when we wanted to calve and we worked back from there and planned well in advance,” he explains.

“I was made aware by both Keith and the technician of the importance of timings in these programmes.

Mr Dickson says the added bonus of using the synchronisation programme is the reduced need to visually observe heats which removes a variable from the system.