Eight new American Holstein bulls are among the top 10 in the latest Profitable Lifetime Index (PLI) ranking, published this week by AHDB Dairy.

All eight young genomic sires have been introduced since the previous genetic evaluations were released in August, seven of them from the US Peak breeding programme.

Top of the leader board is Peak Breaking News with a PLI of £957. This reflects his excellent transmission of udder health, with a -35 Somatic Cell Count (SCC) index and a -4 Mastitis Index – the best in the top 20.

He also scores highly for daughter fertility, at +12.5. 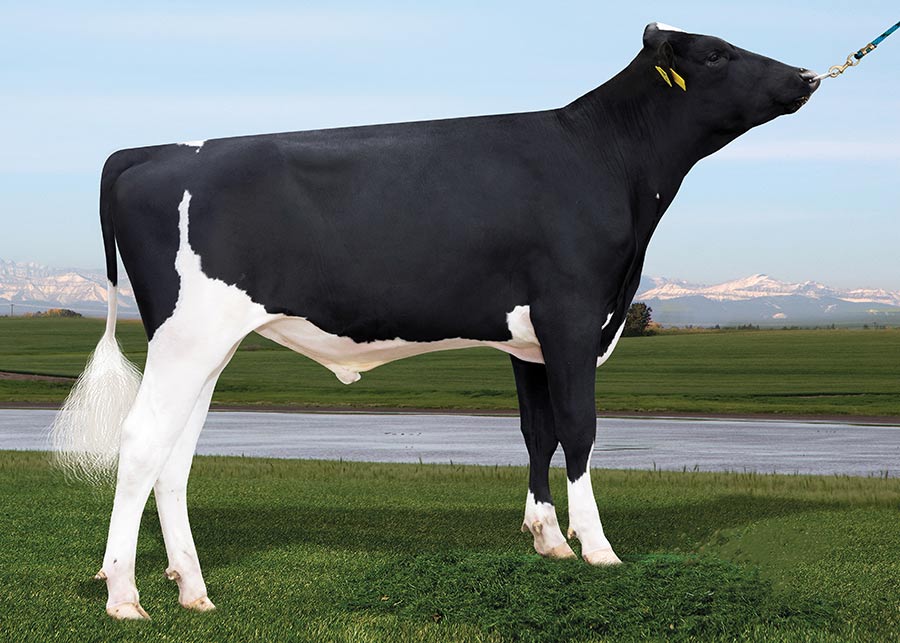 See also: How to assess and improve dairy herd genetics

These rankings contribute to a Lifespan Index of +207 days, and a high score for the recently launched HealthyCow, at £348. Breaking News is sired by Peak AltaZazzle.

Pushed into second place is Genosource Captain, who nevertheless retains his PLI of £944. With a Predicted Transmitting Ability (PTA) for milk of 1,156kg, he continues to demonstrate high milk production.

He also has a FeedAdvantage of 265, which means his daughters are predicted to save 265kg of dry matter intake during each lactation, compared with daughters of a bull of comparable production whose FeedAdvantage is zero.

This is due in part to his favourable Maintenance Index of -16.

Captain’s EnviroCow rating of 5.1 is breed-leading and shows his daughters are expected to create the lowest level of greenhouse gas emissions in their lifetimes for each kilo of saleable product they produce.

New in third place is Winstar Graziano, with a PLI of £937. This reflects his transmission of very high milk solids (+0.35% fat and +0.12% protein) and Maintenance Index of -14. He is also sired by Peak AltaZazzle.

Fifth ranking Winstar Greycup, full brother to Winstar Graziano, has a PLI of £917 and a high EnviroCow score of 4.9.

Peak AltaLajoy is at number six, with PTAs of fat of 60.5kg. Badger SSI Big Al Newman keeps his place in the top 10 with a PLI of £896 and is the highest ranking HealthyCow sire at £361.

Peak Rainbow is new in at eight, offering exceptional fat transmission at 62kg (0.24%) and a PLI of £887. In equal ninth position are two more newcomers, each with a PLI of £884.

Three new bulls from the elite Denovo female nucleus established in the UK are just outside the top 20. Denovo Rhapsody scores highly for udder health and calving ease and has a PLI of £869; Denovo Raffa transmits high fat and has a PLI of £848, while Denovo Adderley’s PLI is £841.

Progenesis Wimbledon moves straight to number one in the proven Holstein ranking on PLI.

Early information on his daughters shows the top features of this bull are PTAs of +0.34% fat and +0.18% protein, a good Lameness Advantage, at +2.5%, and a daughter Fertility Index of +9. 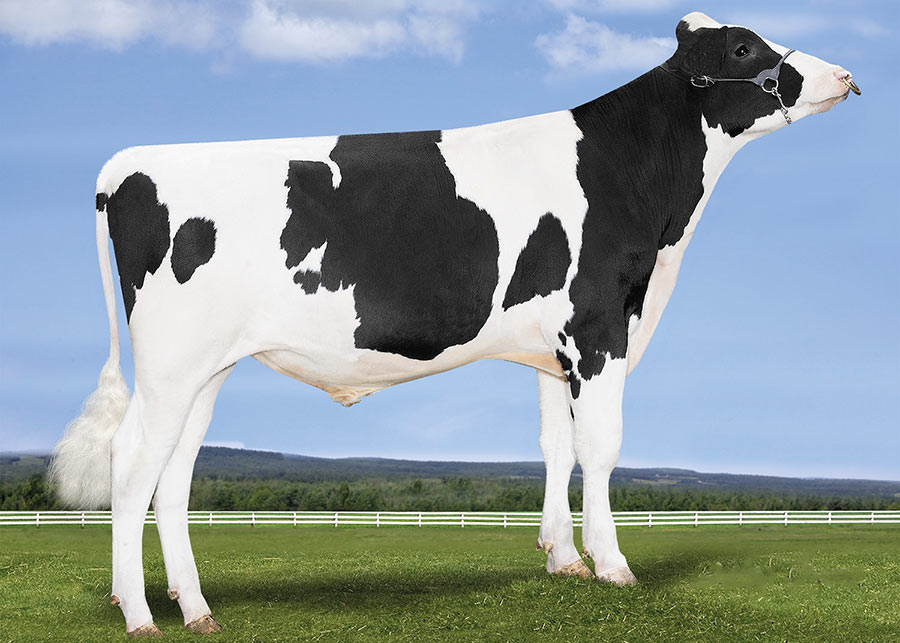 Peak AltaZarek, with a PLI of £750, climbs from third to second place. He has the best Lameness Advantage in the top 20, at +3, and a Mastitis rating of -3, showing he transmits very good udder health.

His sire is former top-ranking Bomaz Alta Topshot, who still features in the top 20.

In third place is another former number one. With 413 UK daughters contributing to his production proof, Westcoast Yamaska has a PLI of £748. His protein transmission is 37kg and +0.16%.

Climbing to fourth position is Leaninghouse Helix, with a HealthyCow score of £253. He transmits excellent udder health, scoring -27 SCC, -3 Mastitis, Lameness Advantage of +2.6 and Fertility Index of +11.1.

Sixth ranking ABS Crimson, with a PLI of £722, also has an EnviroCow score of 3.6. His strong Calf Survival Index (+2.8) boosts his environmental credentials.

New entrants take the next three places, two of them equalling Crimson’s PLI. Denovo 8084 Entity is a former top-ranking genomic young sire, while Bomaz AltaCabot has the best Maintenance Index in the top 20, at -16.

AHDB’s head of animal genetics, Marco Winters, says: “Although their PLIs are inevitably lower than those of the leading young sires, some of these slightly earlier generation bulls have hundreds, and, in some cases, thousands of UK daughters, and many more around the world.

“With high reliabilities and proven breeding patterns, there’s no reason why they can’t continue to have a valuable place in producers’ breeding programmes.”

He is followed by the leading proven Holstein bull, Progenesis Wimbledon, whose SCI of £472 reflects his transmission of high milk solids, lameness reduction and fertility improvement – all key traits for spring block calving herds. 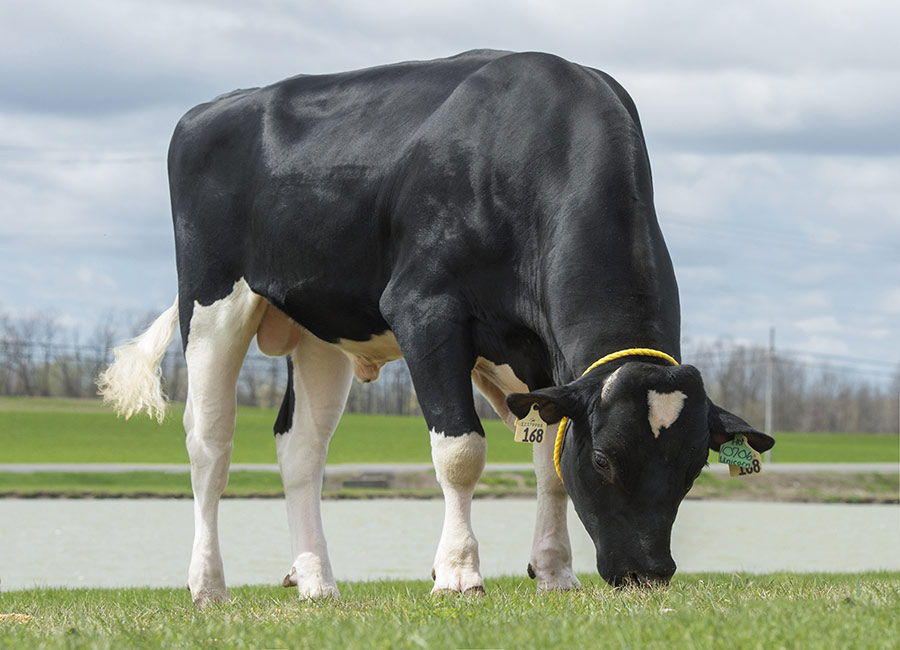 Top proven Holstein sire and second on the SCI, Wimbledon also takes the number one spot on the Autumn Calving Index (ACI). His ACI of £661 shows he is as suited to autumn block calving as year-round calving.

The SCI and ACI are across-breed indexes.

Jersey bull River Valley Cece Chrome retains the number one spot for the breed. He has a PTA of 841kg milk and a combined fat and protein of 64.6kg. His PLI is £546.

And new at number three is VJ Ravninggaard Huus Hamlet with a HealthyCow index of £168 and a PLI of £459.

In fourth place, with a PLI of £425 and a HealthyCow ranking of £169, is VJ Hagenbjerggaard Hian Hitman.

VJ Aarre Lappe Lari takes the number five spot with one of the highest EnviroCow scores of the breed, at +2.6.

VR Vilano remains in top place among the reds and Ayrshires with a PLI of £468. He offers good PTAs for production and daughter fertility and an EnviroCow of 2.8.

VR Gobel, with long daughter lifespans (+116 days) and a PLI of £467, remains at number two, while VR Vimpula moves up to third position, transmitting the highest milk production of the breed, an EnviroCow ranking of 3.2 and a PLI of £426.

VR Alatalon Flame Feton drops to number four but takes the top spot for Fertility Index at +15.2. VR Fabu, another daughter fertility improver and the highest ranking HealthyCow bull, at £238, moves up to number five. His PLI is £406.

Inch Persistent, with a PLI of £366, moves back up to number two, and staying in third is Catlane Caleb, with excellent daughter credentials for fertility, a top score for maintenance and and EnviroCow of 2.2.

Moving up to fourth place is Manorpark Google, with a PLI of £316. And in fifth is Catlane Cromwell, with the best HealthyCow ranking in the top five, at £209.

Indexes for Montbeliarde, Brown Swiss, Guernsey, Shorthorn and Fleckvieh can be found on the AHDB website.