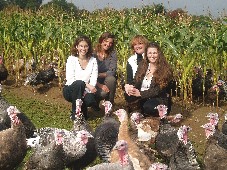 Copas Traditional Turkeys is celebrating its 50th year of rearing Christmas turkeys by producing a special anniversary flock of rare and heritage turkeys.

Tanya Copas said: “2007 is our Golden Anniversary of rearing Christmas turkeys with real old-fashioned qualities. To mark the occasion, we have partnered with Heritage Bred Poultry to raise a special ‘Copas Gold’ flock of rare & heritage breed free range turkeys.”

The ‘Copas Gold’ flock includes Buff and Bourbon Red turkeys, which are both rare breeds, as well as heritage breeds; Slate, Narragansett, and Heritage Bronze turkeys. All the breeds have been selected for their free range suitability, natural shape, weight and special eating qualities.

The free range Gold Flock will roam in grass meadows and is being fed on a natural cereal diet rich in oats.

With the addition of the new rare and heritage breeds they will be rearing over 30 breeds and strains of turkey for this Christmas.