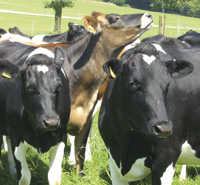 Cross-breeding could yield significant financial benefits by reducing levels of culling due to infertility, a study has revealed.

Although Holstein-Friesian cows produced 384 litres and 512 litres more milk than Jersey x Holstein-Friesians in the first and second lactations, respectively, there were no significant differences in fat and protein yield between breeds.

This is a reflection of the improved milk composition with the Jersey x Holstein-Friesian cows, says AFBI researcher Rachel Park.

“With the milk price currently as low as 18-19p, taking a slight dip in yield by cross-breeding may not be as significant,” she says.

The Jersey cross also had a higher conception rate to first AI, with 72% of maiden heifers getting pregnant to the first service, compared with 62% for Holstein-Friesians.

The results were not significant, but there was a trend in both first and second lactations for Jersey crosses to get in-calf more easily than the Holstein-Friesians, with infertility resulting in 34 Holstein-Friesian cows being culled compared with 13 Jersey cross-breds.

Improved fertility and financial gains from culling fewer animals is one of the main reasons farmers taking part in the study have continued to use the Jersey cross cow, says Mrs Park. “There is no doubt the black-and-white cow is regarded as the best milking animal, but since the farmers on the trial have started using the Jersey cross, they have liked it because of improved fertility, better health, handling and management. Many are also actively seeking to buy in more cross-breds.