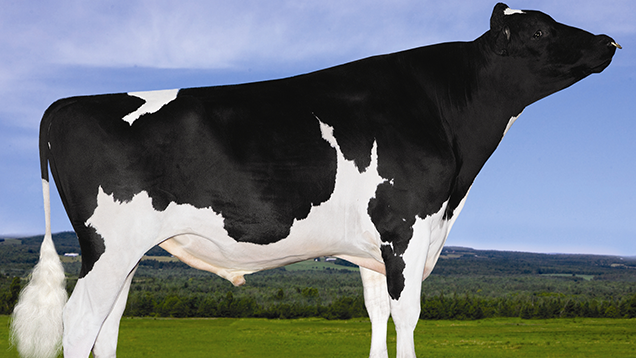 Gen-I-Beq Lavaman retains the top spot in the latest Holstein bull proof run with a Profitable Lifetime Index (PLI) of £615.

Transmitting a correct balance of production which raises milk solids, together with good daughter fitness, this son of Man-O-Man, also breeds daughters which require less feed for maintenance than the breed average due to their smaller size. His Maintenance Index is -4.

A new entry in second place is De-Su Ransom whose early daughter information from the USA contributes to his PLI of £595. Ransom (Robust x Ramos) combines high lifespan (+0.7) and daughter Fertility Index (+10.3) with solid production. He pushes April’s number two sire, Prehen Omen, into third place, now with a PLI of £582. UK-bred Omen’s high milk solids and in particular protein percent at +0.16 are noteworthy.

In fourth place is Kings-Ransom Erdman, whose continuing improvement for daughter Lifespan Index sees him rank with the best of the breed for this trait at +0.7. He improves his PLI to £561.

The familiar name of Mainstream Manifold (PLI £535) features in fifth position, now with 1,760 UK daughters contributing to his figures. He is closely followed by the second UK-bred sire in the top 10, Laurelhill Classic (PLI £530). Classic sees further gains to his Lifespan Index (now +0.6) and his daughter Fertility Index (+15.8).

Climbing into the top 10 is Seagul-Bay Supersire, a popular sire of sons who started his career as a high genomic young sire. Supersire leads the rankings of milk and solids production, with 908kg milk, 37.2kg fat and 27.7kg protein. This along with solid fitness figures results in a PLI of £527. Supersire shares seventh place with Beacon son, Roylane Flex. Flex improves his PLI due to gains in his daughter fertility and conformation traits.

With nearly 9,000 UK daughters now contributing to his production proof, Gran-J Oman McCormick ranks in ninth position (PLI £524). With a daughter Fertility Index of +19.5 he is the breed leader for this trait.

Massey son No-Fla AltaEverglade rounds off the top 10 and firms up his former ranking with a PLI of £517.

The first UK-bred new entry Denmire Merchandise is in 37th position with a PLI of £468.

Canadian bred Sandy-Valley-I Penmanship retained his number one position in the PLI ranking, 66 £PLI points ahead of his closest rival.

This Enforcer son from a Numero Uno dam transmits high production with outstanding daughter lifespan (+0.7) and fertility (+12.0), reaching a PLI of £743.

With figures based largely on his own DNA (which always remains static) together with an element of his parents’ performance, it is the latter which has improved over the past few months.

Second ranking Stantons Checkers (Predestine x Freddie) is one of four newcomers to the top 10, making his debut with a PLI of £677, a particularly high percentage fat (+0.25%) and a high Lifespan Index (+0.7). He also scores favourably for maintenance (-2), indicating his progeny require less feed than average for their own maintenance and he is the highest type transmitter in the top 10.

Climbing to third is De-Su Firewall (PLI £669), another sire with an excellent maintenance index (-9), thanks to daughters slightly smaller than average. He combines this with solid production, low somatic cell counts (-25), high lifespan (+0.6) and good daughter fertility (+11.1).

The highest UK-bred sire and from a pure British cow family is Topcroft Pesky Trix who moves into fourth position with a PLI of £660. Featuring solid production and superb fitness, Trix is backed by a family with high lifetime yields and maintaining fertility. Bred by Tom Crawford in his Suffolk herd, Trix is the first Pesky son to the market. He also weighs in with a Type Merit of 2.17.

Boardshop holds his PLI at £657 and shares fifth place with newcomer, Comestar Loic (Flame x Sudan), whose breeding pattern is notable for its high milk components.

Also new in the top 10 are Apina Nadal in seventh and eighth-ranking De-Su Apex (PLI £652 and £648). Nadal, as a Rocky x Goliath, comes from a family that has produced several high genomic animals already, including 24th ranking Norman. Apex’s pedigree (Cashcoin x Numero Uno) is more familiar and he is maternal half-brother to Battlecry in 20th position. Apex (PLI £648) has superb transmitting abilities for fitness traits, with very low daughter maintenance (-16), low SCCs (-32) and long lifespans (+0.7).

Other new names to watch out for just outside the top 10 are Sonray-Acres PRD Justice (Predestine x Man-O-Man), a bull transmitting good milk quality and low maintenance (-4) and with a PLI of £620; Sandy-Valley-I Picasso (full brother to Penmanship) and with a PLI of £619; and Bush-Bros JC Justify (Jacey x Denim) who is one of the best daughter fertility improvers in the top 25 (+12.6) and also has a PLI of £613.

Among the PLI rankings for the Friesian breed, two Catlane bulls emerge as joint front-runners, both with a PLI of £373.

Although originating from the same Christine family, their closer pedigrees are quite different, as are their breeding patterns. Catlane Caleb is the highest milk components Friesian available with 0.3% fat and 0.14% protein and also transmits good daughter fertility. In contrast, Catlane Chad transmits the highest weight of fat and protein in the Friesian breed, but has breed average daughter fertility.

New in number three position is Deangate Quaich (PLI £293) who displays a good all-round production and fitness profile. He is a Centurion son from a Hylke dam.

The Jersey ranking is dominated by Danish breeding, led by Danish VJ Link, with a PLI of £467. His high daughter Fertility Index (+10.5) combined with solid production puts him ahead of second ranked Danish VJ Hilario. Hilario makes a new appearance in the top five thanks to improvements in his Lifespan Index (+0.3) while his daughter Fertility Index is +9.4 and overall PLI is £446. Danish DJ Holmer moves into third place while Danish DJ Lix rises to fourth with additional UK daughters in his evaluations to earn a PLI of £390. In fifth is the high reliability and widely used Q Zik (PLI £357).

There is little change in the Ayrshire rankings with long-term front-runner, Gunnarstorp retaining his top position. He adds a handful of UK daughters for the first time and now has a PLI of £502, due to a strong combination of production, fitness and type. In second place is Pell Pers (PLI £462) and climbing to third is son of the number one sire, VR Gunnarstorp Backen Gobel with a PLI of £447. His gains are largely due to a further improvement to his already high daughter Fertility Index, to make him the breed leader at +15.4.

The Spring Calving Index (£SCI) has been a feature of the bull rankings for exactly a year, and during that time, Danish Jersey bull, VJ Tester remained in the lead.

Tester further strengthens his grip with his transmission of high milk solids, high fertility and low maintenance which together give him an SCI of £436. These traits feature strongly in the £SCI which is formulated specifically to assist herds which have a spring block-calving system and are targeting production of around 4,500kg/year. Second place features another Jersey bull, VJ Link, with a similar range of qualities whose SCI is £405.

Moving up into third place is the British Friesian sire, Catlane Caleb (SCI £394) who also has the highest daughter Fertility Index in the top 10 £SCI sires.

Another big climber is VJ Hilario (SCI £385) who now stands in fourth position, and in fifth are the Holstein sire, Gen-I-Beq Lavaman with the Jersey, Danish DJ Holmer, each with an SCI of £380. Lavaman offers the highest production potential among the top £SCI bulls while Holmer scores for positive components and daughter fertility.

“The £SCI ranking is increasingly proving its worth for producers selecting genetics for grazing-based systems,” says Marco Winters, head of genetics for AHDB Dairy. “It’s also proving to be useful for those considering cross-breeding, as it is the only ranking in which one breed is compared directly against another.

“However, even within each breed there is significant genetic variation which means that farmers should be mindful of which bull they choose, both within and across breeds,” he says.