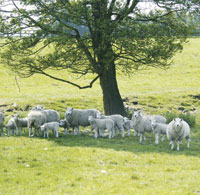 EBVs could be the icing on the cake for sheep producers, as Jeremy Hunt reports

Higher prime lamb prices look likely to continue, even as the main marketing season kicks into gear. But there’s even more money to be made out of the sheep market if producers switch-on to the extra income to be earned by using rams with Estimated Breeding Values (EBVs).

“Spending a little time getting familiar with what the various EBV figures mean – in terms of the potential extra profits these sires can produce – could be the icing on the cake for many producers as they look ahead to the profitability of next year’s lamb crop.

“The feedback we’ve been getting from producers this spring, and who used EBV sires last year, has certainly highlighted the importance of being able to get single-born lambs away earlier and relieve pressure on grass. This season that has been critical for those in areas hit by a lack of grass growth,” says Mr Boon.

However, for sheep producers reluctant to buy rams with EBV figures, Signet is urging them to think about specific traits of rams – traits they believe are most likely to improve the value of their lamb crop.

Mr Boon recognises the biggest stumbling block in getting sheep farmers to move from buying rams solely on visual assessment and start taking account of EBVs, is that many assume they are then forced to ignore physical attributes.

“That’s not the case”, say Mr Boon who believes that an “obsessive” approach to buying rams solely on their looks can be just as detrimental as only buying on figures.

“There has to be a compromise and no one would advise buying a ram with high performance figures if it had obvious faults – say either poor feet and legs or small testicles.

“But likewise, to assume that a ram with the biggest back-end or with other superior conformation is automatically going to be the one that produces the most profitable lamb crop to suit your system is equally misguided.”

For producers selling lambs deadweight, Mr Boon suggests calculating how they could benefit by changing slaughter grades by either increasing carcass weights or reducing finishing times. Rams that will bring the most appropriate – and ultimately profitable – genes to their own flock could then be selected on their EBVratings.

And producers shouldn’t forget about the influence of the flock’s females in the end product. If home-bred replacements are retained, consideration should be given to EBV traits such as Maternal Ability (milk) and Litter Size – even when females by a terminal sire are kept.

This year, for the first time, producers will be able to access EBV figures from every major Signet sheep breeding evaluation.

“Sheep producers will be able to access details from a flock they may feel has rams that would suit their requirements and review the EBVs for animals on the farm.

“The website www.egenes.co.uk/bascosearchsheep enables buyers to set their own criteria, then see how many rams meet their requirements within the flock or across the breed,” says Mr Boon.

And high genetic rams – those with high EBVs – shouldn’t be considered “out of reach” in terms of cost, adds Mr Boon. “Producers should see these rams as offering the best value for money in terms of the improvements they can impart to their slaughter progeny. It’s also important to look at what other issues some breeders of these rams are tackling such as selecting for worm resistance, rearing rams solely off grass without additional feeding and even resistance to diseases such as coccidiosis.”

All the rams – six shearlings and two ram lambs – were bought at the annual on-farm sale of rams held by Charles and Valerie Marwood near York.

“Prime lamb producers are being encouraged to use rams with proven performance figures so we decided to give them a go. But while we were obviously looking for sires with good figures, we were still determined the rams we bought had to be pleasing to the eye in terms of conformation.

“I’ve got to admit that we initially selected rams on appearance. If the ram looked right and the figures were good we knew it was a ram worth considering. I think that’s the way most commercial ram buyers are tackling this as they move into the world of EBVs for the first time,” says Mr Bush.

He says he’s not “totally figure driven”, but is equally convinced that EBVs are providing buyers with some assurance of a ram’s breeding potential.

“It’s taking out the guesswork. And if sheep values continue to increase – and rams prices too – using EBVs as part of your sire selection should help you spend more wisely for something that is expected to do what it says on the tin.”