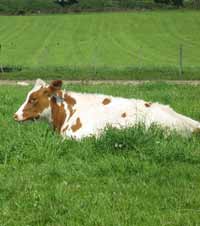 Hybrid vigour from cross breeding is worth in excess of €100 a lactation in addition to Economic Breeding Index (EBI), said Donagh Berry, Teagasc.

“However, the daughter will also get an extra ‘kick’ from hybrid vigour worth an extra €100, meaning, in this case, the offspring would have an EBI of €250.”

“Norwegian cross breds were also estimated to be worth an extra €130 a cow a year versus Holstein Friesians.


“Production in the Norwegian cross breds was also similar to the Holstein Friesian cows, meaning we can expect an increase in herd productivity, particularly when using top genetics,” he said.

The cross breds were also able to maintain better body condition and showed a significant improvement in reproductive efficiency. Udder health was also shown to be improved with the Norwegian crosses in comparison to the Holstein Friesians.

The decision of where to go after the first cross can be a difficult one, but the choice will affect the degree of hybrid vigour carry over, said Dr Berry.

“In a two-way cross, for example, alternating between Friesian and Jersey will retain €66 worth of the €100 benefit from hybrid vigour.

“However, when using a third breed, you will maintain €86 worth.”

And using a Kiwi cross/synthetic cross is only worth €50 in hybrid vigour, and by continuing down this route, this value will reduce over time.

“But with all these crosses, the key is to only use high EBI bulls,” he said.

“Irish dairy farmers are facing challenging times with impending removal of milk quota and milk price volatility – there will be significant opportunity for dairy producers to grow their business in the coming years.”

And the potential to increase production will require an increase in national cow numbers and make generating high EBI replacements even more important.

Expansion is the “buzzword” for dairying, with about 50% of Irish dairy farmers wanting to expand, said Joe Patton, Teagasc.

“As a country we are likely to be short of maiden heifers, but to facilitate expansion we need to have more heifers on the ground.

“To improve herd profitability, replacements should be high EBI animals to boost herd genetics and provide a valuable income from surplus animals.”

The number of dairy heifers born is on the increase, but because of a reduction in dairy AI and also high mortality rates, the increase is not enough.

And when calved early heifers have the potential to significantly improve herd calving pattern, he said.

“In a spring block-calving herd, a heifer calving in April will be difficult to get back into calf to calve at two years and is more likely to drop out of the system.

“Ideally farms should aim to calve 70% of maiden heifers in the first three weeks and 95% in the first six weeks; this is achieved by realising target weights and body condition.”

At Ballydague, heifers are involved in a synchronisation programme to guarantee they calve before the main herd.

“Synchronisation should be used as a management tool to maximise the number of heifers that become pregnant as quickly as possible after mating start date.

“This comes with the added advantage of giving extra time to get them back in calf for a second time and gets them off to a good start,” he said.

• Tail painting and inseminating heifers following observation of oestrus during the first six days of the breeding season.

• All heifers not inseminated in this period receive a prostaglandin injection on day serve and are inseminated following signs of oestrus in the next 3-5 days.

• Heifers failing to come into heat following the first injection get a second shot 10 days later.

• Heifers are again inseminated at standing heat or receive fixed time AI at 72 and 96 hours after the second injection.

This method usually results in submission rates close to 100% and conception to first service of 70%.