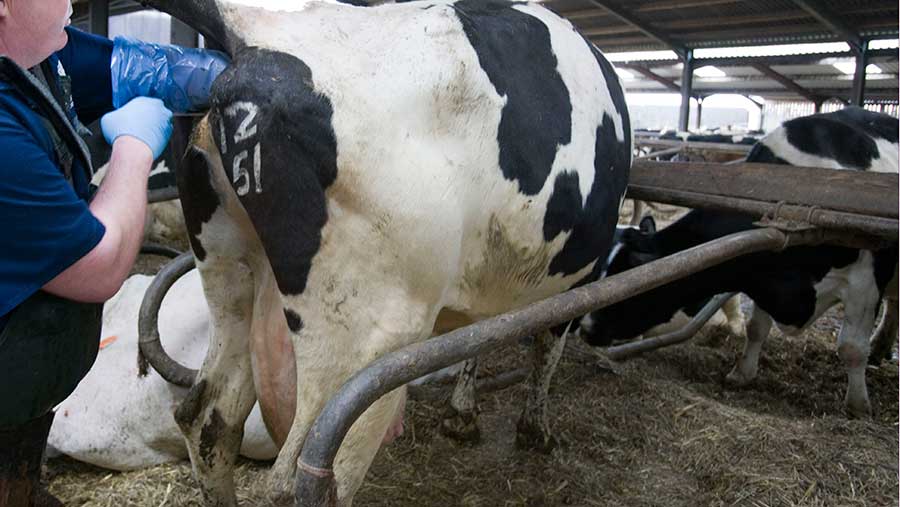 Fertility in UK dairy herds has improved significantly, according to eight-year data trends published in the latest 500-herd report by the University of Reading.

The report analyses data and monitors trends from a cross-section of NMR-recorded Holstein herds for 34 key management criteria.

James Hanks, who co-authored the report with Mohamad Kossaibati, said this progress in annual milk production could well be attributed to the improved fertility performance.

“This indicates that cows are getting pregnant earlier and being dried off sooner in preparation for their next calving. Earlier conception indicates there are fewer cows with extended lactations and low daily yields,” added Dr Hanks.

What has helped improve fertility?

While no single factor will be the sole contributor to fertility improvement, NMR vet Karen Bond suggested the UK herd will now be reaping the benefits of the fertility index introduced in 2005 that allowed producers to select for fertility in their breeding programmes.

“This will have made gradual improvements to herd fertility in the past decade,” she said.

Mrs Bond believes improved fertility management will be at the core of the improvements and rising trends, especially better heat detection.

“Heat detection is a big area and producers are embracing new technology to help them on farm. Cows will, in general, only display heat for a few hours and often not very strongly. If this is in the middle of the night the heat will be missed if they are relying solely on visual observation.

“Heat-detection systems, such as collars, allow these heats to be detected and provide accurate action lists. I think this has had a big effect on submission rates and getting cows back in calf quicker.”

Mrs Bond also believes the use of routine vet visits to examine problem cows earlier and address fertility issues will help to reduce calving-to-conception intervals and the calving index.

“Improved fertility performance plays a major role in herd efficiency and profitability, but it’s not a stand-alone issue. Only healthy cows, in good condition, will have good fertility.”