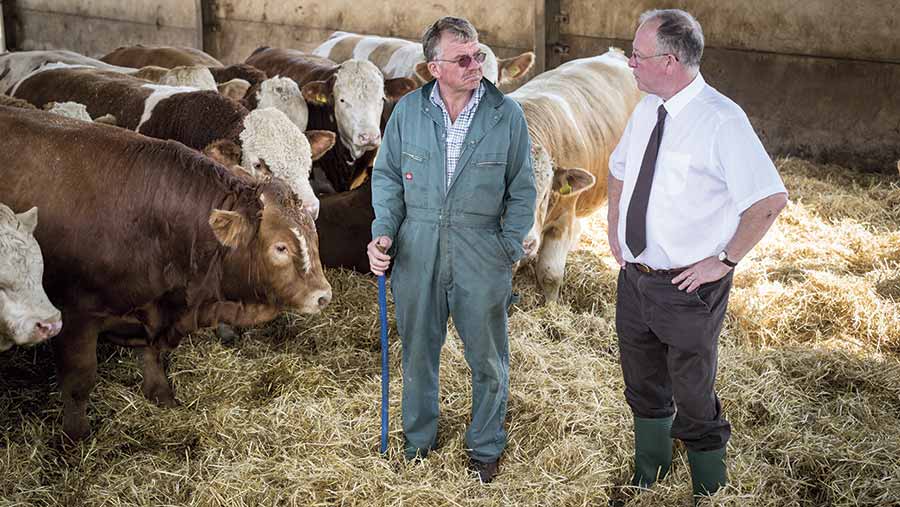 Calves sired by bulls with higher terminal indices record heavier carcass weights resulting in returns worth an additional £45/animal when compared to progeny of bulls with lower genetic merit.

Harper Adams University compared the performance of 2015-born progeny from two Simmental bulls at Ian Willison’s Nottinghamshire suckler herd – one within the top 1% of the breed and another within the top 10% (see bull comparison table below) out of Simmental x Blue cows.

Researchers found that calves sired by the bull with terminal indices within the top 1% recorded heavier carcass weights of 12.7kg worth £45/animal (with a base carcass price of £3.40/kg) and were leaner.

Simon Marsh, Harper Adams principal beef lecturer, who carried out the trial, said the finishing performance of both groups of  bulls was tremendous, reaching carcass weights of 382-395kg at just 12.5 months old, but more importantly mirrored the EBVs of their sires.

He added: “The study gives a clear message that EBVs with high accuracy work – even between the top 1% and the top 10% of bulls.”

It is the sixth study of its kind Mr Marsh has conducted. Last May Farmers Weekly reported on the results of a comparison of progeny born in 2014 from one terminal sire and maternal sire at Mr Willison’s farm last year.

In this latest trial, performance of calves born in 2015 were compared from birth to sale.

Calves were born indoors in late July before being turned out, with bulls weaned the following April and intensively finished on a TMR consisting of maize silage and high-quality blend, including soya bean meal, and were slaughtered between 12-13 months.

The bulls were slaughtered at ABP York and three of the 30 bulls were penalised slightly for being too heavy (over 420kg) – two of these were sired by Bradley. However, despite these penalties Bradley sons still returned an additional £45 more than Volvo progeny due to their carcasses being heavier.

“Post weaning the calves from the top 1% bull really motored on and achieved phenomenal results and proved yet again that EBVs from bulls with decent accuracy work all the time. Why some producers ignore EBVs beggars belief.”

Mr Marsh said the results prove bulls with high growth rates grow efficiently at heavier weights without putting on too much fat.

With this in mind, he believes farmers should select bulls with figures like Bradley’s, with high growth rates and low, negative fat depths, which will promote fast growth and efficient fat cover.

“However, if you have got a market that penalises very heavy carcasses then sell early since bulls will stay at fat class 3 for well over 6-8 weeks. The only issue you may have is with breeds like Blondes and British Blues, which are extremely lean.”

If farmers have an issue getting fat cover on their animals then he suggests selecting bulls with positive Fat Depth EBVs – or low negative values.

Slaughter performance and carcass grades of the bull calves