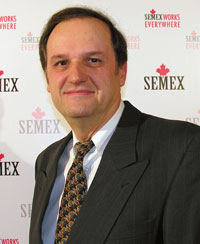 DNA technology is set to change the way some semen companies select bulls and is claimed to the biggest event since frozen semen.

This spring will see Genomic Estimated Breeding Values (GEBVs) replacing EBVs, increasing the reliability of genomic data. The first GEBVs will be officially published by the Canadian Dairy Network (CDN) in April.

But the transition to the use of genomics will be fairly transparent, says Semex Alliances senior geneticist Jacques Chenais (pictured) during an address to delegates at the recent Semex Dairy Conference in Glasgow.

“The main difference with current evaluations will be the increased reliability resulting from the use of the animal’s DNA profile, and eventually of the DNA profiles of its relatives,” he said.

Genomic selection involves the analysis of DNA to predict the performance of a bull’s daughters rather than waiting years for them to come into milk. So young bulls can be pre-selected depending on their DNA profile before they are progeny-tested, allowing a larger number of young bulls to be screened as candidates.

“Potentially this means a wider range of bulls will be available across more families with more combinations of traits,” said Dr Chenais.

Semex, which is taking part in the North American Genomic Selection Project, has identified 58,000 markers to help predict the genetic merit of an animal, allowing selection on that basis. Dr Chenais said more than 5000 proven bulls in the project had been genotyped to see whether their genomic evaluations predicted their proof.

“The genomic EBV combines the marker effects identified and parent averages, clearly making GEBVs more accurate,” he said. “But producers using GEBVs must remember they are not as accurate as bull proofs.”

The accuracy is certainly more than that of the parent average alone, however. For example, for fat and protein, using genomic data is equivalent to having between nine and 18 daughters in addition to the parent average, instead of 80 to 100 daughters for a bull proof.

But in breeds such as the Brown Swiss, because of the small number of bulls to estimate the market effects, the increase in accuracy was negligible, he said. Likewise, in the Jersey breed, where bull numbers were intermediate between the Holstein and the Brown Swiss, results were also intermediate.

This shows the hazards of not using large enough numbers of proven bulls to get accurate estimates of marker effects, a mistake New Zealand breeding company LIC made recently. Cutting progeny testing from 300 to 100-150 bulls and putting a lot of emphasis on its “bull teams” resulted in the withdrawal of some of its genomically-tested bull teams because of a slide in their breeding value.

But Dr Chenais said: “Although this is a new technology and there are bound to be some surprises, the North American project has used more than 12,000 Holstein bulls compared with a significantly smaller number used by LIC.

“Using genomics in a herd is simpler than people may think. Genomic EBVs look just like EBVs, only are more accurate, and should be used in the same way. This will particularly benefit producers using young sires in their breeding programme because their chances of becoming elite will be greater.”

Most AI companies are likely to offer groups of bulls with high GEBVs for specific selection objectives. The reason for offering bulls in groups is to decrease the risk associated with the lower accuracy of genomic evaluations compared with proofs.

“But while the ultimate proof of an individual bull may vary from its initial GEBV, the average proof of a group of bulls is likely to remain closer to their average GEBV,” said Dr Chenais. “Such bull teams are well suited to clients less concerned about cows’ individual sires, such as large commercial herds.

“The bulls are three years ahead of proven bulls, on average, so their genetic merit should be higher on average, which means more genetic progress for herds using them.”

Semex has already begun to offer this type of product with the Genomax bull teams. Some teams are geared to large commercial herds, with emphasis on cow longevity, fertility, production and functional conformation, while other teams are closer to a balanced breeding approach.

Genomics will inevitably affect future breeding decisions, and Dr Chenais added: “This is the biggest event in dairy cattle since frozen semen.”