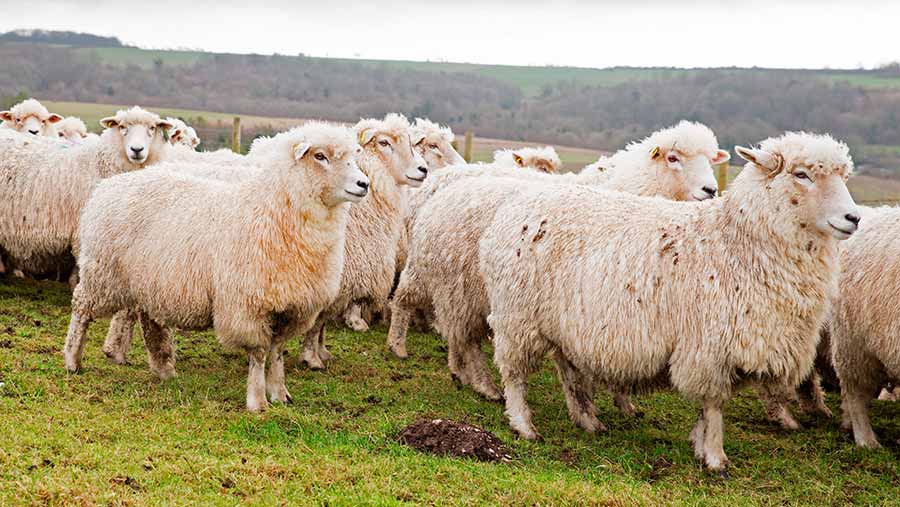 Most UK sheep producers hold ewe lambs for a year to breed as yearlings, but this means losing 12 months of income.

Economics are now persuading some to rethink their breeding policy.

Ewe lambs producing a lamb in their first year can be the most profitable animals in Robert Hodgkins’ performance-recorded flock of 1,200 New Zealand Romneys.

Lambing the ewe lambs from 1 May, a month after the main flock, means their offspring are sold into the more lucrative January and February market.

“Even if they only yield 16kg carcasses, the higher price means they compare well to a 19 or 20kg carcass sold earlier in the year,’’ says Mr Hodgkins, who farms with fiancée Jo Franklin.

They farm rented land in Stevenage, Hertfordshire, and receive no subsidy so every animal must generate an income. “Every mouth has got to pay,’’ says Mr Hodgkins.

“We don’t select on individual traits because by doing so we could sacrifice other traits,’’ he explains.

The ewe lambs are run separately from the main flock and Mr Hodgkins tups these with the top 2% New Zealand Romney rams from his parents’ flock.

Teaser rams are turned in with the ewe lambs for 30 days, from 1 November, to give them two full breeding cycles.

On 1 December the fertile rams are turned in for a month.

Ewe lambs are out-wintered on stubble turnips and get the best grazing. “We didn’t feed any concentrates last year but I wouldn’t be averse to top-up feeding if they needed it,’’ says Mr Hodgkins.

This year 138 of the 204 ewe lambs scanned as carrying singles, 25 twins and one with triplets. Forty were empty but Mr Hodgkins says many were animals he should probably not have included in the breeding programme.

“We are in the process of building numbers so kept back 30 that should possibly have gone for meat.’’

Unless the ewe lamb is very fit, she will have only one lamb to rear. Based on this year’s scanning results there will be 27 orphan lambs to rear – a disadvantage of lambing them later than the ewes.

But they are reared on milk for five weeks then weaned.

Mr Hodgkins says ewe lambs often make the best mothers. “They get straight back into it second time around but the challenge is maintaining body condition.’’

To achieve this they are weaned at 80 days compared with 100 days for ewes. Ewe lambs are also kept on stubble turnips from the beginning of September right through to February. They also get an iodine drench or bolus during this period.