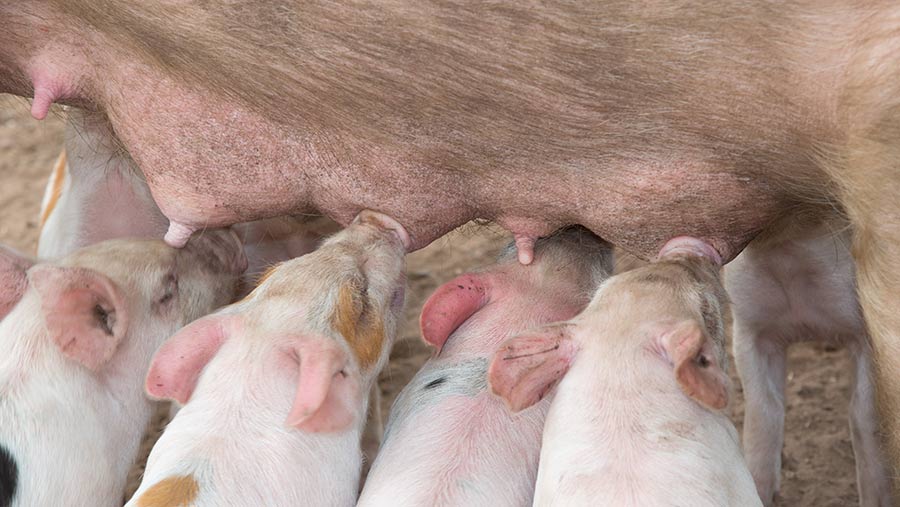 Genetic progress in pig breeding is continuing to push up born alive numbers, with the top 10% of farms now averaging 18.4 pigs born alive and the top third, 16.65.

However, an increase in born-alive numbers can also see a rise in mortality.

Low birthweight – below the target 1.5kg/piglet level – is one of the biggest factors reducing piglet survivability, according to Rattlerow Farms’ indoor production manager Adrian Scarfe.

There is the potential to create a negative public reaction to larger litters where they are associated with increasing piglet mortality. Breeders must gauge public acceptability in their quest for higher numbers born.

In contrast, smaller litters produce heavier individual piglets as there is more space in the uterus for placental attachment.

But Mr Scarfe says it is too easy for farmers to focus on the number of pigs born when in fact, the figure that will have the biggest impact on the profitability of a pig farm is feed-conversion ratio.

“The breeding herd serves as a function to provide a product for the profitable side of the business, which is turning feed into meat.

“We need piglets to be weaned at more than 7.5kg based on target birthweights of 1.5kg, as they will grow faster and convert feed more efficiently. A 0.1 difference in feed efficiency is worth £2.40 a pig,” he says.

However, while high piglet born-alive numbers may be the holy grail for some farmers, they need to be aware of the impact breeding for this can have on whole-farm performance.

Mr Scarfe says: “We have the skills within the industry to deal with large litters, but farmers shouldn’t push for large litter sizes if they haven’t the resource management to cope with them.”

For example, when breeding for high piglet numbers, farmers should ask themselves:

1 Has my farm the capacity to be rearing and finishing those pigs?

Increasing the stocking rate can have a negative impact on feed conversion as there is more competition for food and between pen mates. If you don’t have space, have you a market for the excess piglets?

2 Have I got the ability to keep the extra piglets alive?

This could be in terms of the extra labour required to deal with more piglets and operate successful cross-fostering systems, for example.

3 What is my pre-weaning mortality and what is acceptable?

The average pre-weaning mortality in the UK in indoor systems is 12.1% with the top 10% down at 10.69%. In outdoor systems, it is less, at 9.93% for the top third, likely due to recording difficulties.

4 Am I managing to wean pigs at a heavy enough weight?

There are farmers who are producing 18 pigs with mortality down at 7%, but it comes down to attention to detail, he says.

Making sure you have enough staff to manage farrowing is crucial when it comes to managing large litter sizes.

On one of Rattlerow Farms’ multiplication units, which operates a batch farrowing system, they have dedicated workers that deal with the sows during farrowing.

They even employ a nightshift worker during farrowing. The attention to detail means they can wean 32 piglets a sow a year and have a pre-weaning mortality of 7-8% compared to a UK average of 12.1%.

Mr Scarfe says: “If you are batch farrowing 100 sows or more it is worth looking at employing a nightshift worker during farrowing. Batch farrowing also supports higher litter numbers as the staff can be focused on one job at a time.”

Fostering may be necessary where:

There are a lot of smaller piglets that would benefit from being on a gilt with better access to teats.

The suckling routine in piglets is established within 12 hours, so the teats that are adopted by piglets at birth are kept until they are weaned.

Teats that are not in use dry off naturally, so if you are going to cross-foster then it needs to be done within the first 12 hours.

If there are large numbers of small pigs in a litter, it is best to move these on to a gilt or a parity 2 sow. Mr Scarfe explains:

“Gilts have smaller teats, so it makes the milk bar more accessible for these smaller piglets. Gilts should be selected that have a high number of teats, good teat presentation and accessibility.”

Colostrum intake is needed in the first six hours, as after this the gut begins to ‘close’ and after 24 hours the full benefits of the immunoglobulins are no longer available to the piglet.

In large litters, ensuring piglets get adequate colostrum can be managed through split-suckling – managing the suckling on the sows by splitting the litters.

If there are too many piglets for the sow to support or a large variation in piglet size the litter can then be split, and smaller piglets moved on to gilts, which reduces competition and allows better access to the teat.

In outdoor systems cross-fostering is one of the few management options that can be employed when managing large litter numbers, due to the reduced accessibility to the sow and her litter.

Milk supplementary systems can be installed to deal with high litter numbers, however, hygiene is paramount.

This should be viewed as a last resort as the best method is always to allow piglets to suck naturally.

If a gilt or sow isn’t milking flat out it can affect fertility as the sow will be more likely to come into oestrus if there is less milking pressure.In outdoor systems, milk supplementation is harder.

However, some farms have developed weaner boxes that provide a gruel to piglets in outdoor systems.

There should be a balanced approach when it comes to making dam line breeding decisions.

It shouldn’t just focus on numbers born, but should also look at robustness, mothering ability, temperament, feed conversion, daily liveweight gain, longevity and the physical shape of the animal.