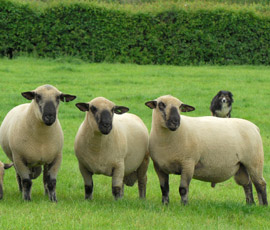 The trend reflects the fact that breeders are making more use of performance recorded sires, as well as continuing to select carefully for performance traits recorded by the Signet Sire Reference Scheme (SRS), says Signet’s breeding specialist, Shane Conway.

“Rates of genetic gain across the breed have increased considerably together with financial benefits from the lambs’ genetic potential to enhance growth rates (see table 1). These rates are even higher in performance recorded flocks which are proactively selecting sires on the basis of their performance figures.

“The financial benefits vary from farm to farm. However, the average performance recorded Hampshire Down ram born in 2012 now has the estimated breeding potential to produce commercial progeny that will kill out up to an extra £4 per lamb at slaughter than those animals born in 2007,” says Mr Conway.

“The increase in rates of gain can be attributed to a number of factors – the increased use of high EBV sires, an increase in the number of flocks proactively weight recording and the use of new technologies such as CT scanning. The lambs born this year will be the future stock sires for the breed – so this bodes extremely well for the future,” adds Mr Conway.

“In fact the difference between a set of Hampshire Down cross twin lambs finished at 12 weeks and the tail end of the crop at 30 weeks is approximately 290kg DM, a significant volume worth £23.18 – EBLEX figures based on ewes bearing twin lambs requiring 2.8kg grass DM per day. In addition, early finishing frees up grassland for the remaining ewes and lambs, while other parts of the farm can be rested.

“Furthermore, higher volumes of performance recorded lambs will increase the accuracy of the evaluations and in turn, enable even faster rates of improvement within the breed.”