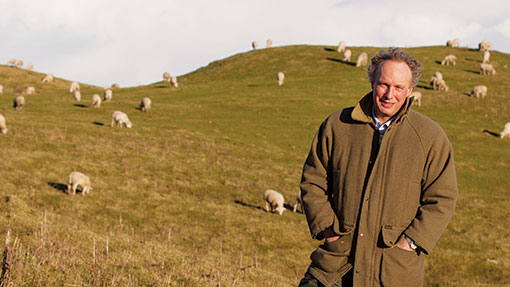 As interest in EBV’s in the sheep sector increases, performance recording is going to become a critical aspect for all pedigree sheep breeders. Sarah Alderton visited one farmer in Northern Ireland to find out how he is tackling it.

He has been taking detailed records since the late 1980s, but admits that back then the service offered in Northern Ireland was all terminal sire and carcass focused.

Now he is recording both terminal and maternal traits to get good female performance without having any impact on the carcass traits by using a version of the Hill 2 Index.

“Performance recording gets behind the look of the animal,” says Mr Tweed, former president of the Ulster Farmers Union . “My experience tells me those that look better often aren’t the ones that are working hard. By analysing performance you are picking up the true performers so you can concentrate your efforts on them and make progress.”

Mr Tweed, who runs a pedigree flock under commercial conditions, records with both Signet and Sheep Ireland, and in 2012 he performance recorded all 3,000 ewes. He uses the overall Signet Easycare index to select stock.

Over the past 20 years Mr Tweed has used performance recording as he has moved away from a traditional Scottish Blackface and Colbred-cross flock to that of “easier care” sheep. He has done this by introducing carefully selected performance-recorded Wiltshire Horn rams and, more recently, Easy Care rams into his flock.

“When my father left school, half of his wage on the farm came from the wool cheque . But in 1999 when the wool price dropped it was costing more to shear than we were getting for the wool, so I decided to go and visit Iolo Owen in Anglesey, who was the pioneer of commercial wool-shedding sheep.”

Due to MV quarantining rules when importing sheep into Northern Ireland, Mr Tweed found a local Wiltshire Horn breeder and bought four rams to cross in to his flock. He later bought further performance recorded ewes and rams into his flock to increase family lines.

By 2005 Mr Tweed had about 11 Easy Care rams. “We were managing to mate up to 150 ewes per ram and they were finishing the job in good shape, they didn’t melt,” he says.

Mr Tweed runs an almost closed flock, excepting a small number of breeding stock he needs to buy-in every few years to bring in new genetics. “When buying in breeding stock I always look for high index animals with physical correctness such as good bite and sound structure,” he says.

The flock is now all Easy Care as he amalgamated the Scottish Blackface and Colbred nucleus flocks together. “We wanted a more productive system and decided to simplify the system and amalgamate into one flock.”

Mr Tweed now has 22 families including five Wiltshire Horn which provide rams for terminal sire use and 17 Easy Care families. He runs 28 single sire mating groups out of the 22 families with all animals EID tagged.

“The aim is to be continually improving performance, so we are producing the most efficient animal.”

Mr Tweed records a range of production traits which he uses to base his breeding decisions on. High index stock intended to keep as breeding stock are scanned for backfat and eye muscle, this includes both ewes and rams. This year 600 lambs were scanned. “We do this as it is important for meat quality,” he says.

Eight-week weight and 20-week weight are also measured. “Based on the data we’ve recorded we then split them into groups of three: good, middle and poor. The good animals we will definitely keep for breeding, those in the middle we will assess and the poorer ones will be finished for meat.”

Mr Tweed no longer selects on fleeces as the majority of his sheep are now wool shedding. However, he will still assess the fleece and record whether it’s in full fleece or scruffy or bare.

At tupping time he uses different coloured raddles to determine which sire the ewes have been tupped by, this is then recorded with a datalogger using EID.

At lambing maternal traits are recorded. “We spray the last four digits of the ewes tag number on her side so she is easily identifiable. Because we lamb everything outdoors we have to do this. We then record the sex of her progeny and, if we have to assist any at lambing, that ewe and her progeny will be finished and sold fat.”

Mr Tweed doesn’t rank maternal ability – it’s either good or not, but he does record lamb size. He also records health problems such as lameness. He will treat an affected animal once, but if there is any reccurence they will be culled.

Mr Tweed says he performance records as he believes in being transparent. “Ram buyers are interested in performance and in southern Ireland farmers are paid to be in discussion groups and buy four-star or five-star rams.”

Mr Tweed’s aim is to try and produce everything from grass. Lambs are killed when ready, mostly making a cold weight of 19kg produced mainly off grass.

Mr Tweed finishes all his own lambs which are sold through Dunbia. Two-thirds are R grades.

“My aim is to reduce time to slaughter and get more from grass. And with getting so many R grades this is why I don’t feel the need to use a conventional terminal sire and the Wiltshire Horn is used instead.

“If you can produce maternal sheep with good carcass qualities you have the best of both worlds,” he says.

Mr Tweed is chairman of the Maternal Sheep Group, which aims for faster and better progress of maternal performance and sharing of scientific and performance data.