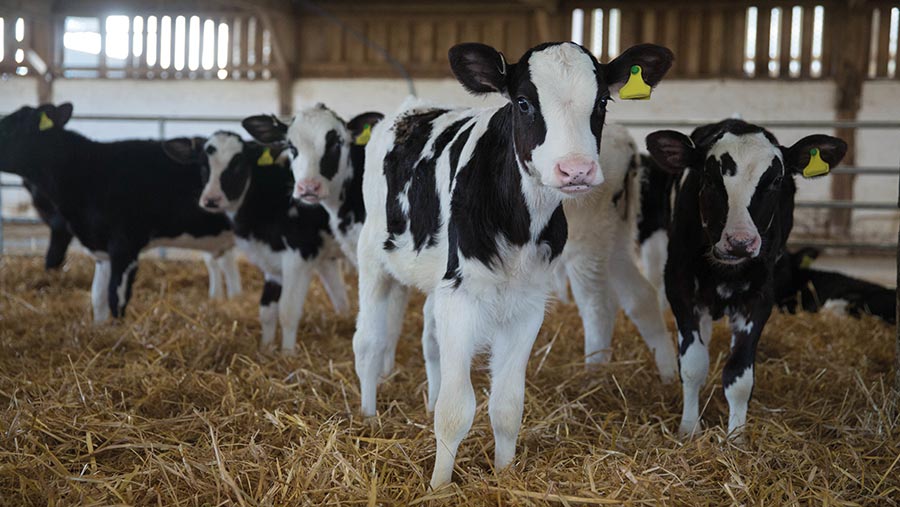 Genomic testing replacement heifers has a cost benefit of £19.39 a heifer, according to a three-year study involving nine Welsh dairy farms.

The project compared the difference between estimated breeding values based on parent averages – a composite of a heifer’s family pedigree – and genomic predicted transmitting ability (PTA). Genomic PTA provides information early on in a heifer’s life to allow breeding decisions to be made before rearing costs are incurred.

See also: 6 tips on using genomics in your dairy herd

Genomic testing is now 60-70% reliable for predicting future performance, compared with just 35% for parent averages, but testing adds an extra £25-£30 to rearing costs.

The European Innovation Partnership (EIP) study, which involved 432 Holstein Friesian heifers, weighed up this cost against the benefits. It calculated a cost benefit of £19.39 for each heifer (the total economic benefit of £46.89 an animal minus the test cost of £27.50 a head).

However, Victoria Hicks, of Kite Consulting, who analysed the results, says the cost benefit figure does not include any cumulative improvement in future generations.

“Improving fertility and health with the use of genomic testing will allow herds to increase the productive life of the herd which, in turn, will reduce the replacement rate and allow the freedom for selection intensity to occur,’’ she says.

Heifers were tested in April 2018 by a farm technician to reduce the risk of testing and sampling errors.

Once these heifers had started their first lactation, their performance was monitored until September 2020.

Of the 432 animals tested, the project achieved a final dataset of 291 animals with genomic and traditional PTA information and complete 305-day lactation results.

Some animals didn’t fully reach the 305 days, had missing fertility information or their traditional PTA could not be recalculated because their sire didn’t have an official UK proof available.

Ms Hicks says the study has proven the ability for genomic testing to identify inferior or superior heifers at an early age based on health, fertility and production.

“Specific advantages for improving fertility and SCC performance by selecting animals based on genomic PTAs instead of traditional PTAs have been demonstrated.”

Increasing the rate of genetic gain should be a priority for all dairy farmers given increasing environmental concerns and requirements, she adds.

But herds that are expanding and need to maximise heifer numbers are unlikely to achieve the full cost benefits shown by the study, because they cannot be as selective in their breeding choices, Ms Hicks admits.

However, herd expansion may come into question in the Clean Air Act proposed in the UK government’s Environmental Bill so improving herd genetics could provide a route to expand milk production without increasing cow numbers, Ms Hicks says.

Father and son Roger and Tom Bletcher were among the nine dairy farming businesses involved in the EIP study.

The genomic tests on their 400-cow, year-round-calving herd showed a big variation between animals, says Tom. 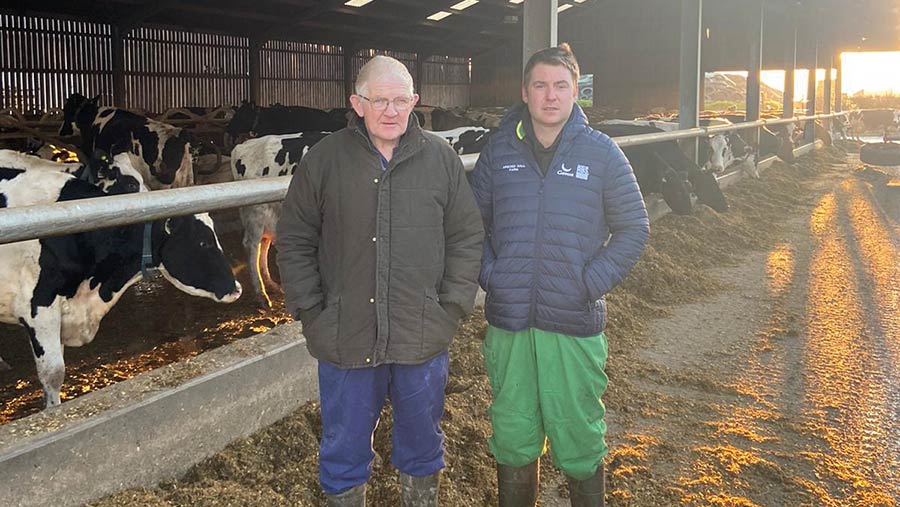 Tom Bletcher and his father, Roger.

Culling decisions at Argoed Hall Farm had been based on fertility, lameness and mastitis, but the business now intends to use genomics to factor production into the decision-making on which animals to retain as replacements.

“We need to make the most out of every cow place on farm. Using genomics will reduce the variation within the herd and allow us to accelerate our genetic gain,” says Tom.

He admits he was initially sceptical about genomics, but the results of the study had given him the confidence to use genomics going forward.

A challenge with selling the idea of genomics to farmers is the time lag before a return can be seen from the investment.

“When cash is tight and you are not seeing a return for two or three years, it could put some farmers off, as they may see a greater return investing in other areas of their business that pays back sooner,” says Tom.

But having seen the benefits, he says he plans to continue with his own testing now that the study has ended.

“As there is more and more focus on sustainability and lowering our carbon footprint, we are going to need to be as efficient as possible and to look at ways to drive those efficiencies.”

What is EIP Wales?

EIP Wales aims to take the outcomes from research, whether it’s a new technique or technology, and test them at farm scale. There are currently 46 projects across Wales that bring like-minded people from different backgrounds together to try and solve common agricultural problems.

EIP Wales, which is delivered by Menter a Busnes and Farming Connect, has received funding through the Rural Communities – Rural Development Programme 2014-2020, which is funded by the European Agricultural Fund for Rural Development and the Welsh government.