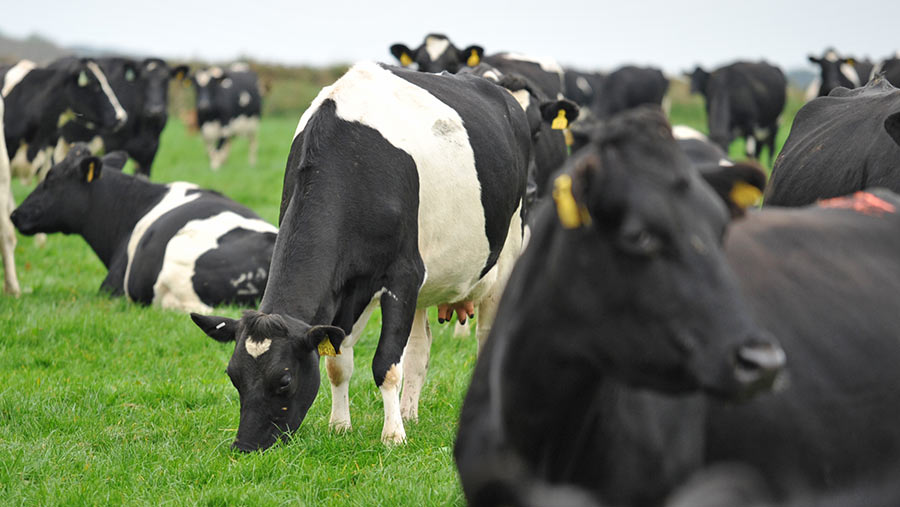 A dairy farmer who is pursuing a milk solids output of 1.5kg for every kilogramme of cow liveweight is using genomics to identify herd replacements to achieve that goal.

At 80.9ha, the farm is tightly stocked, so every heifer replacement must be the type of animal that will help the business maximise the potential of its milk contract.

Mr Cartledge, who farms with his parents, Winston and Anne, at Peaslow Farm, near Buxton, Derbyshire, is using genomics to establish which heifers have the potential to increase milk solids from the current ratio of 1.25 to achieve 1.5.

The Cartledge family sell their milk to Arla Foods and since January 2016 they have been paid per kilogramme of milk solids instead of per litre.

This brings their contract in line with their counterparts in Denmark, Sweden, Germany, the Netherlands, Belgium and Luxembourg.

By 1 January 2018, Arla intends to have transitioned all 3,000 of its UK suppliers to its manufacturing schedule, which is calculated with a greater emphasis on butterfat and protein than its volume-based liquid schedule.

In addition to genomic technology, Mr Cartledge is using other strategies to increase milk solids, including moving from a four- to a five-cut silage system this year.

At 410m feet above sea level, Peaslow Farm is one of the highest farms in England, but Mr Cartledge says that isn’t a barrier to growing grass. “We grow grass really well because we get plenty of rain.”

Thirty young calves and 55 bulling heifers have been tested by NMR’s GeneTracker at a cost of about £30 a head.

“The tests revealed some surprises. The heifers I was expecting to be at the top of the list have definitely changed,” admits Mr Cartledge.

“My aim is to keep the ones that will push my herd forward as quickly as possible, selecting on a number of criteria, including milk quality.”

The business had a large pool of heifers to select replacements from because sexed semen was used during a period of expansion.

“With surplus heifers it would have been crazy not to use the information available for the relatively small cost of £30 a head to select which of those to keep and which to sell,” he says.

A tissue sample was punched from each animal’s ear, sealed in an airtight vial and sent to America via NMR for testing.

John Cartledge is a member of the 1.5 Discussion Group, an initiative sponsored by Asda in conjunction with Arla.

Its membership consists of progressive dairy farmers who adopt strategies to achieve 1.5kg of milk solids per 1kg of cow liveweight.

It takes about six weeks for the tests to be processed and Mr Cartledge admits this time lapse was an issue.

“It was a sticking point for me because we are short on space and I wanted to sell the calves that were not compatible with my system, but I can’t send calves off the farm after 42 days without a TB test.

“We understand that as more people start testing heifers, the results process will speed up considerably. In Holland, they are down to a week or two.”

He will now rear those heifers instead of selling them.

“Having those surplus heifers means that if there are opportunities for further expansion, we will have the stock. They are all excellent heifers, it’s just some are slightly more suited to this herd. If we cannot expand further, we will sell them at the point of calving.”

Mr Cartledge decided to test all heifers because he will use the results to make decisions such as which animals to inseminate with sexed or beef semen and to remove animals that don’t fit with the direction he is taking the herd in.

He says it is important not to overlook other traits when focusing on those most desirable to a business.

“The choice of which to keep and which to sell is always going to be a compromise.

“You have to be lenient, otherwise you could eliminate some of the best animals, but choice ultimately comes back to what is going to make the highest possible return for my herd on my milk contract.’’

One heifer had a low score for fertility, but the highest score for yield. “I am not going to sell my highest-yielding heifer,” he reasons.

His genomic test results are used in conjunction with a World Wide Sires mating programme, to match genomic sires to his heifers.

“I select bulls on production of fat and protein kilogrammes and health traits and World Wide Sires then fine-tunes the list to identify traits that could affect longevity or mobility.

“The first heifers from that mating programme are now being served, so the benefits of higher milk solids from genomic selection will be evident next year and in their offspring.”

He believes milk solids will be the biggest driver in the dairy industry in future and is setting up his herd to deliver on that requirement.

But he questions whether genomic testing is right for expanding herds.

“If you are building up numbers, are you going to remove animals that don’t make the grade and take the risk of buying in from an unknown herd?

“That’s highly unlikely, but it is still right to test and understand which animals you will breed from and which you will put to a beef bull in the future.”

What is genomic screening?

Genomic screening allows dairy farmers to manipulate the structure of their herds to breed cows that are the right fit for their milk contracts.

Testing young heifer calves works on the same principle as the genomic testing of young bulls.

By taking a DNA sample from a young heifer, it is possible to get an immediate indication of genetic merit, equal to the information that could be achieved after two lactations.

Specific animals can be selected to produce replacements depending on an individual farm’s breeding requirements.

David Levick, a consultant with Kite Consulting, who advises John Cartledge, says it removes the guesswork for breeding.

“Genomics provide a massive increase in the reliability of information that has until now only been available through parental average figures.

“It really does change the pecking order of animals in a herd because it identifies those that are going to really push forward for a particular farm and milk contract.”

Genomic testing has a reliability of 70% compared with 30-35% from using predicted transmitting ability (PTA), the parental average.