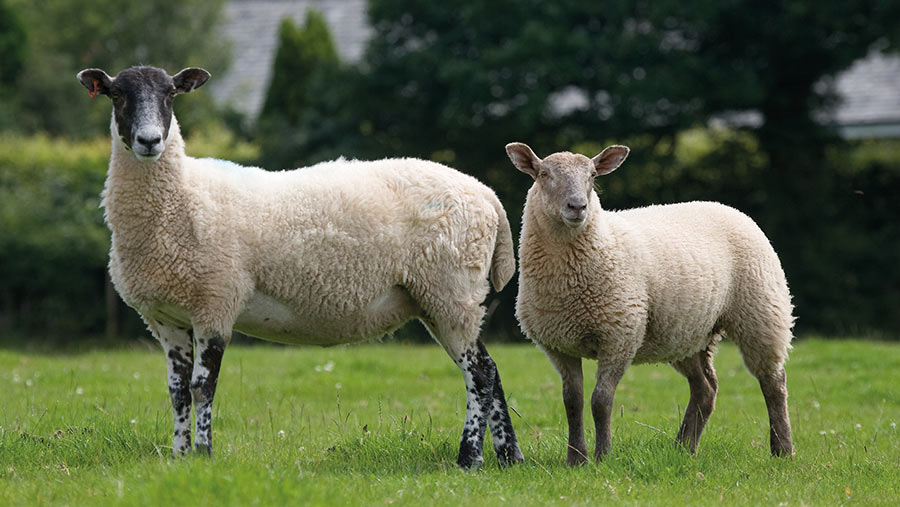 Mule breeders have been mounting a response to the challenge of other sheep breeds in recent years.

Widely recognised as the leading commercial sheep, the combination of a hardy, maternal hill ewe and a prolific, powerful Bluefaced Leicester has been the mainstay of UK sheep production for 40 years.

Farmers Weekly speaks to a Mule breeder and two buyers to find out what Mule breeders could do to retain market share.

What the Mule Group aims to do

The Mule Group was launched earlier this year to unite all sheep breeders crossing hardy upland breeds to a Bluefaced Leicester. Its aims are to:

Get in touch with The Mule Group mulegroup2020@gmail.com

He says some pioneering breeders are now selling “performance Mules” from Signet-recorded flocks, but stresses action is needed on a wider scale to halt the breed’s decline. 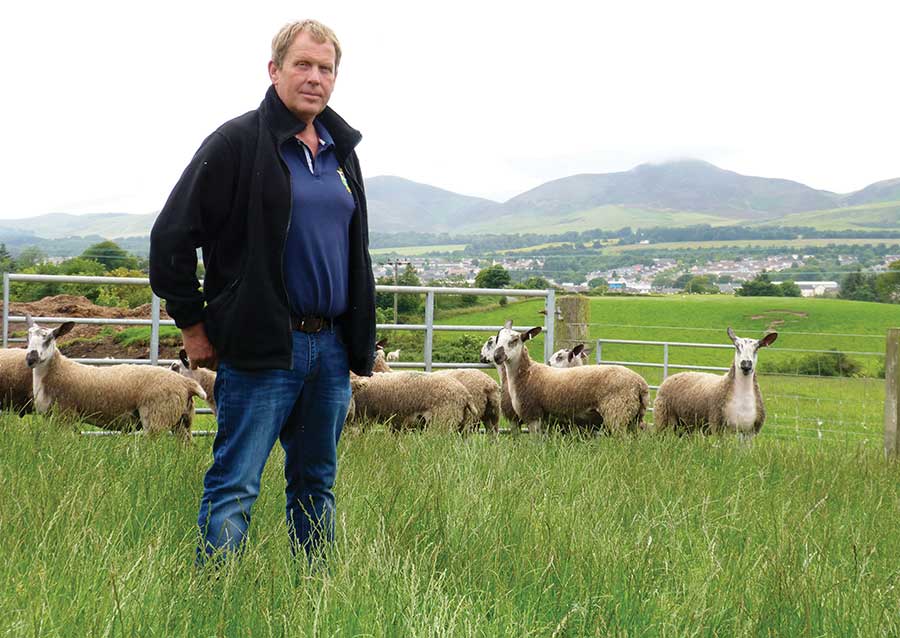 “Mule breeders are producing a good product and it’s time to revisit the hybrid vigour, high scanning and rearing rates and maternal ability that make Mules so popular and profitable.

“If we lose our market share and see averages stagnate, it threatens the Bluefaced Leicester and it could spell trouble for hill breeds as well. Stratification is so important to upland areas, keeping hills populated and rural communities thriving.”

Mr Hall buys Scottish Blackface gimmer lambs from the Campbells at Glenrath, which he then crosses to Bluefaced Leicesters to produce Scotch Mules.

Sandyknowe and Roxburgh Mains Suffolks are bought in to produce fast-growing prime lambs out of the Mules on the farm and 250 Suffolk cross Mules are sold for breeding each year.

Changes
As well as hoping to start breed-level initiatives, Mr Hall is making changes in his Bluefaced Leicester flock.

He has cut back on embryo transfer and stopped chasing “big and fancy” lines to broaden the gene pool.

Instead, he is focusing more on breeding from proven ewes that are four-crop or older to select for genetics that maintain body condition and flesh in late summer and that lamb easily, with good teeth and disease resistance.

Another area of recent progress is litter size, which has started to fall from 250% to nearer 210%. When doing artificial insemination, 150 units of pregnant mare serum gonadotrophin are used now, compared with 400 when flock AI started in 1997.

Optimising litter size at this level will simplify management and lambing workload while still allowing prolificacy to be passed on to the Mule, he says.

A long-standing Mule buyer is closing half his flock to see if Mule performance can be matched by home-bred Texel-crosses and cut biosecurity risk.

Sam Jones has bought about 220 Mule lambs from the north of England for years, but will now only buy 110 and instead retain Texel-cross gimmers out of one half of the Mule flock as replacements.

The Mule flock will still buy in Mule replacements, but will be run separately. 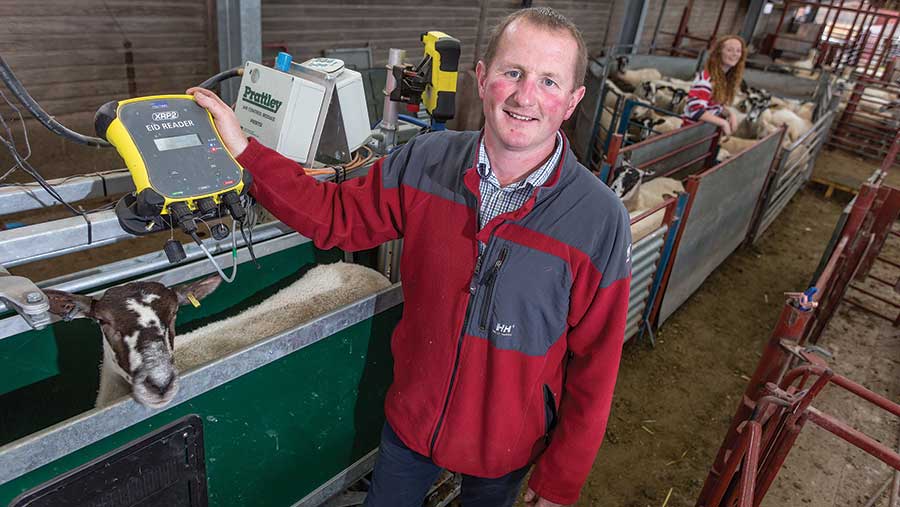 Flock health is paramount and a big investment, he explains. Each year, the farm buys vaccines against enzootic abortion (£2.23 a ewe), foot-rot (95p a ewe) and pasteurella and clostridial disease (75p a ewe).

Hard culling and foot vaccinations have cut lameness to 20 sheep out of 2,800 (0.71%), but Mr Jones wants to ensure he is not buying lameness problems in.

Match the Mule
The higher value of lambs and cull ewes, and money saved on buying in replacements should cover an expected loss in lamb numbers sold, says Mr Jones.

However, after keeping two groups of Texel-crosses, he believes they can scan close to the Mule (see “Benefits of Texel-crosses”). He says the Texel-cross ewe lambs scan 15% lower than the Mule, but as yearlings it’s only 10% less and other farms manage within 5% as mature ewes.

The change coincides with a cost-cutting drive. Mr Jones hopes rotational grazing and herbal leys will help get lambs away earlier, giving ewes more time to gain condition ahead of tupping.

How the Mule could progress
Mr Jones thinks Mule breeders could improve the breed through data and health status. “When a Mule rears twins, she ticks the boxes, although she does need looking after.

“If she could be more feed efficient and have more conformation on the hind quarters, she would be ideal – am I asking too much?

“I think the Mules need more data. Very little data is known about the Mules and it’s certainly not shouted about if it is.

“The underlying health issues with any sheep you buy in is a big problem, regardless of breed. Iceberg diseases are a lot more widespread than we know, I think. That’s where we as farmers need to start testing more.

“Another thing would be that some Mule breeders should select differently. Sell the biggest, best-grown lambs, rather than the smallest and lightest – liveweight gains matter, not looks.”

Progress and data will help Mules maintain and possibly increase their market share in the years ahead, says shepherd Jamie Wild, who runs 2,000 Mules on marginal land alongside an arable operation.

Mr Wild has been farming Mules for decades, and despite trying other breeds, he believes they are the best ewes for the system he manages.

Sheep are teased to lamb for 20 days in March. Lambs are creep-fed from three weeks to get at least 80% away by the end of June so the team can focus on harvest and cultivations.

Mule are bought privately from breeders near Hawes, North Yorkshire.

“We buy from two breeders and the Mules do a great job. Our system is unfashionable, but it fits in well with the arable operation,” says Mr Wild, who uses Charollais tups from his own pedigree flock as terminal sires.

How the Mule could progress
Mr Wild is recording progeny from the Charollais cross Mules using Signet through a project called ChazCompare, which is run in conjunction with RamCompare.

“Some commercial farms have data on how Mules perform and it can influence breeding decisions further up the breeding tree. I think Mules are good, but progress can make them even better.

“Customer feedback I get on my Charollais tups is really useful, whether it’s good or bad. We all need this mentality. Sheep breeding needs to be data driven and not about heads or skins.

“There’s a gulf between the top and bottom 20% of the Mules we buy. Our 30 best Mules lamb on 1 March and both lambs are sold in May. A lower performer still has progeny running with her at the end of June. Those four weeks can be a lot of money.

“We can use data and weed out the bottom end. Without a system to use this information, there will be no progress. Other breeds are constantly progressing.”