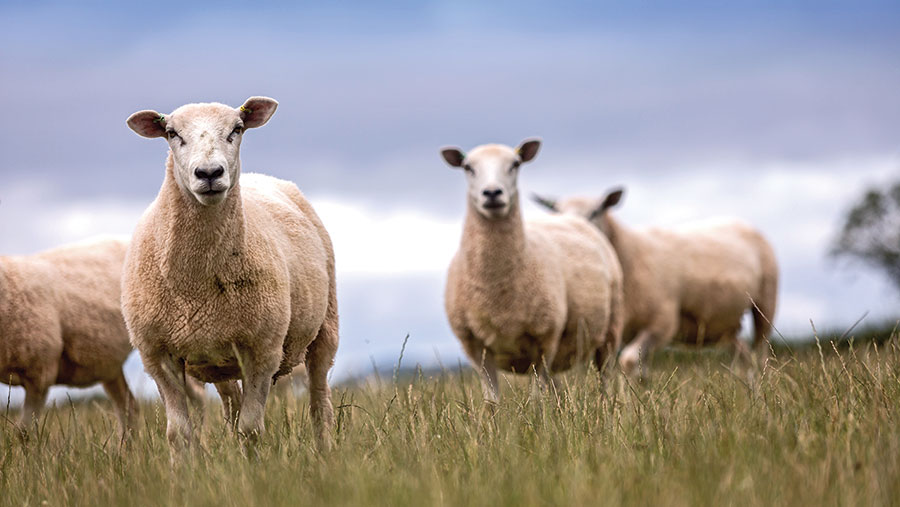 Sheep farmer Frank Lloyd is seeking to increase output per acre on his two Herefordshire tenanted units, to not only cover the rent but also lift overall returns. He introduced a four-pronged strategy.

Establishing a closed flock of smaller equally productive ewes to improve stocking rate is scheduled to make the biggest impact, along with introducing an improved terminal sire, stepping up grassland management and fully embracing EID.

Mr Lloyd runs a traditional system lambing indoors in mid-March. However, he is in the process of swapping his entire flock of Suffolk cross Mule ewes for home-bred Aberfield cross Welsh ewes.

This will allow him to increase his stocking rate from 3.5 to five ewes and accompanying lambs per acre (12.5 ewes plus lambs per hectare), resulting in an overall increase in output per acre of more than 20%.

Mr Lloyd says: “It’s still early days, however, in financial terms, I’m confident that once all costs are incorporated that an extra margin of more than £70/acre can be realised.”

He adds: “While our Suffolk crosses had done a cracking good job, it was time to move on. Stocking rate was at the heart of our issues and it’s one which these Aberfield-cross ewes are countering – they are 10kg to 15kg lighter than out Suffolk crosses.

“While the shearlings are rearing 1.6 lambs compared with 1.7 from the Suffolk crosses, when you multiply the lambing percentage by the achievable stocking rate, the Aberfield crosses produce an additional two lambs per acre,” he says.

This year the Aberfield crosses lambed with minimal assistance, the lambs were virile and the ewes demonstrated good mothering ability taking both their lambs with them.

Mr Lloyd believes, unlike other smaller breeds and his Suffolk crosses, they are weaning their body weight of lamb.

“This season we weaned our Aberfield-cross yearlings at 12 weeks, the lambs exceeded 34.5kg, a weight that almost matched that of similar-aged lambs from the three-year-old Suffolk crosses.

“They have also proved to have good foot structure, which has led to a significant reduction in lameness incidences and overall vet and med costs have reduced by £2 per ewe,” he says.

“I was looking at different systems and ways of doing things, and happened to stumble across the Aberfield by accident while on the circuit contract shearing 20,000 ewes each year, and I witnessed it first-hand working well in other flocks.

“It was demonstrating real versatility, lending itself to a wide variety of production systems and delivering good lamb weaning weights per ewe,” he explains.

In addition, Mr Lloyd says the fact they are bred from performance-recorded genetics by Innovis gave him the confidence to make to investment.

From now on, plans are to retain a 200-ewe flock of Welsh ewes for replacement purposes and breed a closed flock of 600 Aberfield Welsh ewes put to the Abermax or Primera terminal sires.

“We’ve decided to swap our Continental rams for this robust meat ram and like the Aberfield, the Abermax and Primera are supported by performance recording, and I have the confidence they will consistently deliver what’s it says on the tin,” he says.

“Our Continental-cross Suffolk-cross lambs were averaging 20.5kg at 16 to 18 weeks; 70% were away by September at six months, and the remainder by the end of the year. They all finished off grass or forage crops. However, by introducing the Abermax, I am confident we will get even faster lamb growth rates off grass together with improved meat yield,” he says.

Mr Lloyd is continuing to improve the unit’s grass and forage management. Ideally, he would like to lamb outdoors to further reduce costs, however with the farm being wet and on heavy clay, he believes the pasture needs a rest.

Instead, he is feeding the in-lamb ewes high protein red clover silage and next season it’s scheduled to replace concentrate fed.

“We have implemented an annual reseeding policy featuring 60 acres [24ha] to high sugar perennial ryegrasses, red and white clovers. In 2016, 400 lambs were finished off 13 acres [5.2ha] by rotating fortnightly from the end of June to the end of August.”

Embracing EID is Mr Lloyd’s next step towards improving flock efficiency. From 2018, every lamb will be EID tagged at birth so he can take full control of each individual member of the flock and measure its performance.

He hopes it will help him make better management and selection decisions in particular with the ewe lambs.

Any that aren’t up to scratch and don’t meet with my strict protocols for growth rate from milk and grass, together with feet, will be culled, he says.

Mr Lloyd argues some costs are hard, or even impossible to reduce, such as rent, which is more often than not, the highest annual cost per ewe. This is why he is focusing on increasing output from his land.

“Farming 100 acres to the max is better than farming 200 acres for bragging rights,” he says.

“We all look at cutting variable costs, such as fertiliser, feed, vet and med, as well as fixed costs.

Shaving off £5 per ewe is great but often difficult – we’ve been economising as much as we can the past few years, however, increasing output by changing damline under the same cost structure, offers potential for an extra 20% more output.

He adds: “I’ve tried stepping up output by increasing lambing percentage but more often than not, higher scanning percentage does not always mean higher sale percentage.

“After all, true figures reflect the actual number of lambs sold per ewe tupped. Through trial and error, I believe that a scanning percentage of between 180% and 185% is the ideal towards realising an achievable sales figure of 1.6 to 1.7 lambs reared.”