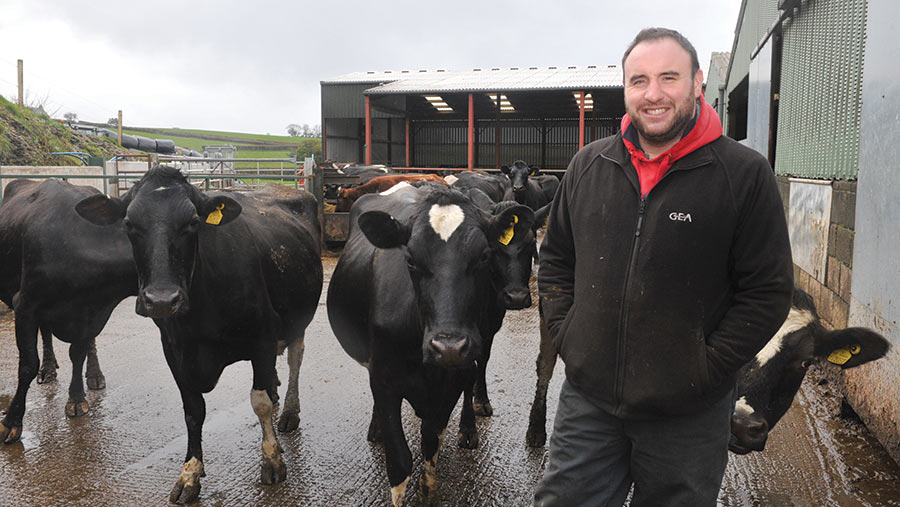 A Welsh dairy farm selling milk on a solids contract is using milk recording data to breed replacements from cows yielding 1kg milk solids (MS) to every 1kg of their liveweight.

Cow numbers have more than doubled and they now milk 320 cross-breds at Llwyn Goronwy, near Llanrwst.

Now they are at target numbers, the business is in a position to improve cow efficiency.

See also: How one farmer is using genetics to increase milk solids

How they are using milk records

As a Farming Connect focus farm, the business has been evaluating the benefits of milk recording in a spring block calving herd.

By analysing kilogrammes of butterfat and protein produced and comparing this to cow liveweight, the Evans’ have been able to identify the most efficient cows in their herd.

Cows were weighed at 100-120 days in milk in August 2019 and, following a programme of milk recording, their performance and size were compared.

The bottom performers include a 700kg cow producing 0.49kg MS per 1kg liveweight, with about 15% of the herd showing “disappointing” results.

“Overall, we were pretty happy with the data.

“The average weight was 527kg and 25% of the cows are hitting the targets we are aiming for,” explains Elgan.

The aim is to breed replacements from the best performers and use beef semen on the less efficient animals within the herd.

Eventually, once they have a sufficient number of heifers, these cows can be culled.

With a rolling annual somatic cell count of 130,000 cells/ml, milk produced at Llwyn Goronwy already falls into the highest price band, but this will help improve udder health and make savings.

“This project gave us the push that we needed to record, and it will give us the information to make adjustments to save pence per litre,” he adds.

“There is no option to input milk solids kg liveweight data, so we had to input this manually on a spreadsheet.”

With 53% of the milk produced in the UK sold on a solids contract, Mr Pitt says this needs to be reviewed.

If more spring calving herds are to take up the option of milk recording then fertility and production information should be presented in a relevant format, which is essential if herds are to become more efficient, he says.

“For instance, there is nowhere in Herd Companion to allow the input of kg/lw for each cow or heifer, which would then automatically upload.

“If this was the case, it would work out who the top performers are, which would run a report that ranks the best animals.’’