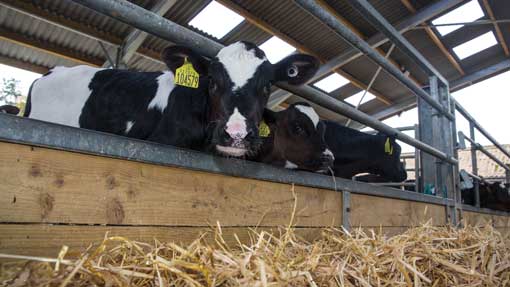 Calving heifers at 24 months of age is the ideal target, yet the UK average is nearer 30 months. Richard Allison offer tips on closing this gap.

For every month you delay the time heifers first calve, not only do you face an extra month of rearing costs, you also face a month less of milk.

That’s the view of Leicestershire farmer Steve Kirk, who is an expert on calf rearing, being the current Volac National Heifer Rearer of the Year.

He firmly believes the first few weeks of life hugely influence an animal’s lifetime performance. High quality replacements are crucial to his pedigree herd of 400 Red and White Holsteins at Holt Farm, which average 9,000 litres.

Two years ago he revamped his heifer rearing, as the age at first calving was creeping up to 26 months. “It was becoming increasingly difficult to calve at 24 months,” he said.

The key changes were to bring rearing back in-house, having previously been contracted out, and established a dedicated farm for replacements, half a mile away from the main dairy unit.

“This is a better way to rear replacements as it is away from the milking cows which can carry infection.

“Bringing it back in house also means I have full control of all aspects of heifer rearing,” he told an RABDF organised youngstock farm walk held on his farm last week.

He pointed to the national average of 28 months at first calving for NMR-recorded herds.

“Many farmers aim to calve at 24 months, but find they don’t achieve it. Just pulling it back two months can make a difference,” he said.

He believes it is down to managing early growth rates. “Calves can convert feed into growth most efficiently during the milk feeding period.”

So what growth rates should farmers be hitting? “Aiming for calving at 24 months and assuming a mature body weight of 660kg, you need to be getting to 360kg liveweight at 12-13 months. This is based on a 55-60% mature weight at first serving and an average 1.4 services/conception.”

Therefore, over the 13 months, calves need to grow at 800g/day. he said. “They have to keep motoring and it is an achievable target with modern genetics,” Mr Gilbert added.

1. Use a set of scales and weigh the powder you are feeding to check your calves are getting the right amount. Are you adding it to a litre of water or making it up to a litre? As this could make a significant difference in concentration as the powder added to the total volume.

2. To achieve gains of 800g/day feed 900g of powder a calf in two or more feedings. But to make sure they are getting enough monitor growth rates. Select 5-10 calves and either weigh scales or a weigh band.

3. Fresh, clean water encourages calves to eat more calf starter. As a rule of thumb, calves need four litres of water/kg of starter feed. In the summer, consider volume of water as there is an increased risk of dehydration.

4. Straw is one of the best forages to feed. If you feed hay or silage, it may satisfy the calf’s appetite and they are then less likely to seek out compound feed. Once past 12 weeks, you can introduce silage and grazing. By stimulating rumen development, it means you avoid getting a check in growth once milk is removed. Weaning should ideally be done when animals are consuming 1kg/day.

5. Minimising moisture in calf housing is important as bacteria and viruses thrive in wet conditions. Moisture also absorbs energy. Ensure floors have sufficient fall aiming for – 1:20 under calf pens and 2% across the building as a whole.

6. Fresh air is key. The recommended ventilation for buildings is 0.04sq m of inlet a calf and 0.08sq m of outlet. If you are unsure whether ventilation is adequate, use a smoke test and see what happens. Check for movement and if it lingers you need to look at making changes.