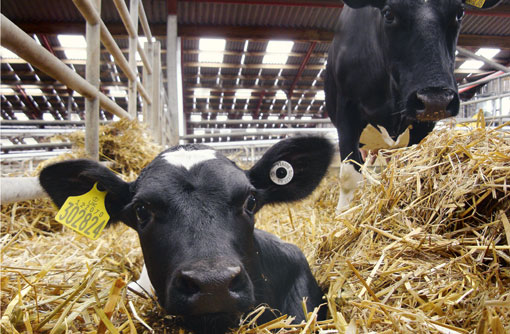 This week sees the release of the first UK genomic bull proofs, but what does it mean and how should farmers use them? Aly Balsom speaks to DairyCo’s Marco Winters to find out

Genomics enables an animal’s genetic potential to be predicted from a young age by comparing its DNA with a “SNP key” which is produced using a bank of genetic information representative of the national population. This allows younger bulls to be used quicker, rather than waiting for progeny testing.

How does it affect me?

From now on the DairyCo bull proofs will include genomic Predicted Transmitting Abilities (PTAs) for Holstein bulls. Two-thirds of Holstein bulls on the active list will have genomic PTAs.

Why are we using genomics?

From now on, the dairy bull proof run will include two lists:

The genomic PTAs will look exactly the same as traditional PTAs, but will be accompanied by the “G” flag.

How should I use the new proofs?

The new proofs should be interpreted in the same way as the traditional proofs – bulls should be selected on PLI and lifespan. See our how to guide for using breeding indices at www.fwi.co.uk/proofguide

How reliable are genomic indexes?

“Reliability of these tested young bulls is a lot lower than progeny tested bulls, so there is a risk/reward balance to be assessed.”

However, although the risks of using second crop, high reliability bulls is lower, farmers could be missing out on the potential genetic gains that could come from a younger generation. 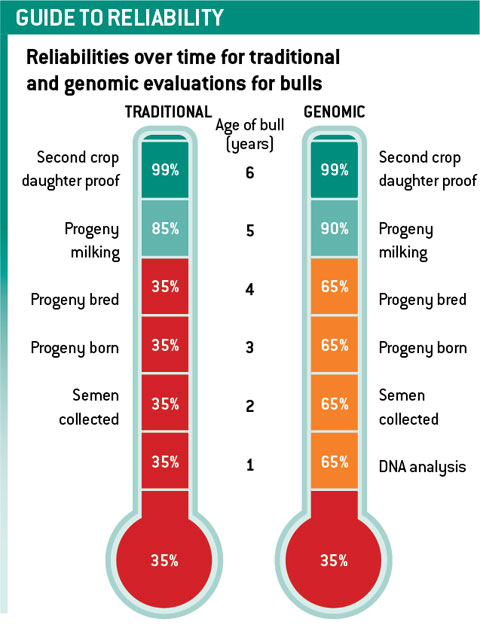 How could genomic indices be used on farm?

Generally, Mr Winters said a good rule of thumb was:

Genomic testing also has a role to play in establishing the genetic merit of females.

Later this year it will be possible to fully genomically test females against a UK base, through a service offered by the milk recording companies and Holstein UK. This will enable the generation of cow specific PTAs via DairyCo.

At the moment, it is possible to genomically test cows, but there is currently only a USA base to compare with. This tool is currently being used by pedigree producers to screen top end females in order to sell bulls or embryos.

As soon as the cost of screening comes down, it may be more cost effective for commercial producers to screen their youngstock to select out poorer animals and serve the best to sexed semen, for example.

Costs may vary, but will be roughly about £40-100 depending on size of the “SNP key” used.

Genomics: What’s been happening in the UK?

Do’s and don’ts of genomic indexes: