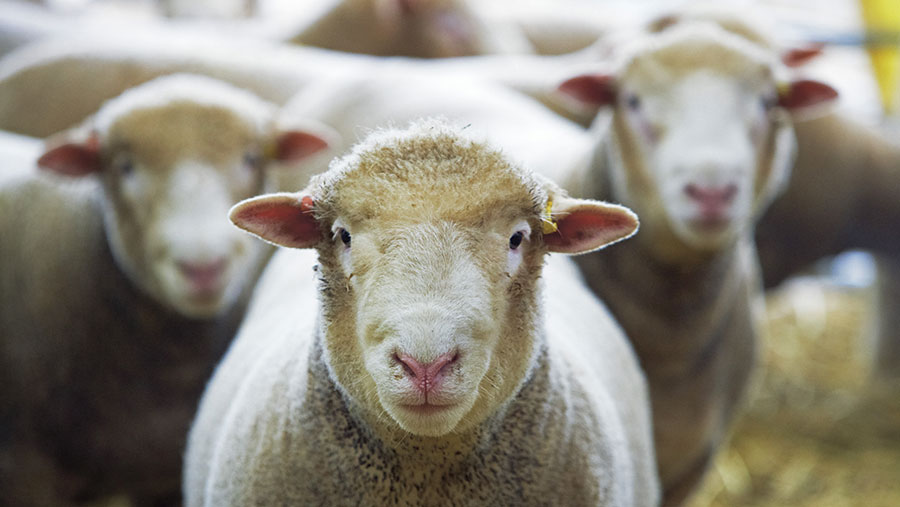 Good fertility and the compact lambing afforded by the Poll Dorset breed is helping a young pedigree breeder grow flock numbers while continuing to work off farm.

Somerset young farmer Joe Larder says Dorset sheep have been a firm favourite of his since he was just 11, when he purchased his first five pedigree ewe lambs from the May fair.

While the 30-year-old is not from a farming background, his late father, Dave, and his mother, Wendy, ran a small herd of 10 pedigree Aberdeen Angus cows on the family’s 5ha smallholding.

But when his father passed away six years ago, Mr Larder, alongside his mother and wife, Rachel, decided to concentrate on the flock to lessen the workload.

Mr Larder says it also dovetails perfectly with his day job as a trainee quantity surveyor.

The Byeways flock now runs at 90 pedigree ewes and followers at Walden Acres, Sandford, and since earned the accolade of overall national flock winner in the breed society’s competition in 2016.

Mr Larder says his focus is on breeding a strong and consistent flock of ewes that have good maternal traits such as milk yield and mothering ability.

“For me their fertility gives me a tight lambing which helps me fit it in with my job.

“As well as being very good mothers, they are quiet-natured and don’t scatter when you go among them. As a breed, they are very hard to beat.”

The ewes are drenched three weeks before lambing and given pre-tupping buckets to help fertility.

They will also be shorn pre-tupping so they don’t need shearing once in lamb.

All ewes are scanned early July and any ewes that are empty are put back to the ram for December lambing.

He explains: “All flock ewes are pedigree and registered and all have strong bloodlines that’s why ewes aren’t moved on and are given the chance to lamb in December. 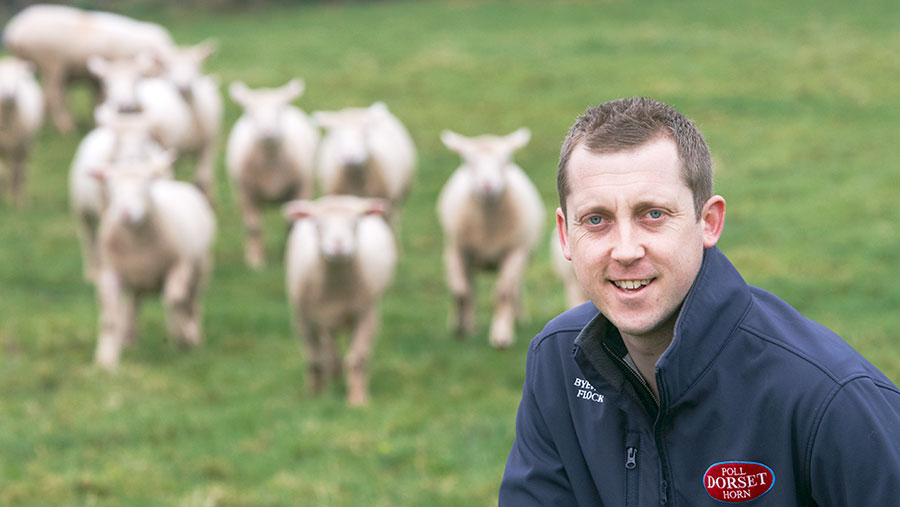 “I also lamb in December as it gives me an opportunity to use a new stock ram that is purchased at the Mayfair to get an idea of the style of lambs he will produce.

“Ewes that don’t lamb in September or December will be moved on if they don’t lamb then, however we have been fortunate in the past five years that all flock ewes have lambed each year.”

Male lambs born in December will be sold for meat, while the strongest ewe lambs will be sold as shearling ewes the following year.

Meanwhile, all replacements are selected from September-born ewe lambs.

The flock is lambed indoors in a new shed nearby the house in September and is turned out to pasture during the day.

“Ewes are brought in at night for lambing due to management ease, as with working full-time and being the one that does the lambing including night shifts it is easier to check the ewes in the middle of night in the barn than it is in the field.

“September is a good month for grass here and the weather is also usually warm and fine. Our grazing is rich, permanent pasture and the sheep do well on it.”

Feed inputs are minimal. Ewes are fed some concentrate in the run-up to lambing and are given 18% protein ewe nuts once they have lambed.

After lambing the grass starts to deteriorate in quality and growth and the ewes are kept in groups of 15 and fed concentrate to help maintain milk yields which aids management and monitoring the sheep. 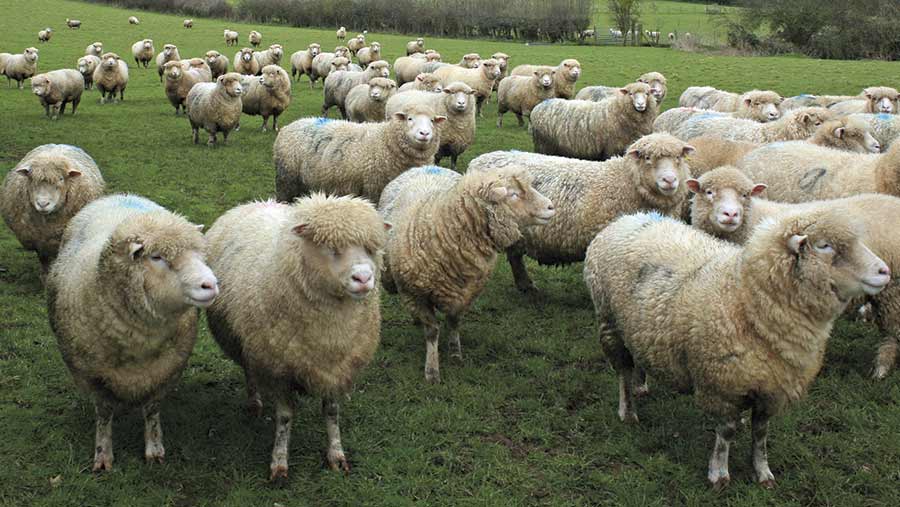 Lambs are introduced to a 18% protein creep feed at four-to-six weeks of age.

By mid-December the lambs are housed to finish them and to conserve grazing for the following season.

At weaning, usually at 12 weeks, ram and ewe lambs retained for breeding are introduced to a coarse mix ration, with all ram lambs kept entire.

Ram lambs are sheared in the third week in January and ewe lambs the first week in March.

Meanwhile, the dry ewes are wintered away from the homestead on 10ha of grass keep in January and February.

Any not retained for breeding along with females have been sold finished on the Dorset Waitrose scheme for the past three years.

Lambs are sold by mid-February at an average 43-44kg liveweight (19kg deadweight), with 90% classifying U and R at 2-3L and the remaining 10% hitting E grades.

Each year 15 to 20 ewe lambs are kept for breeding with between 10 and 15 for replacements. The aim is also to sell six or seven shearling ewes at society sales.

Last year, 45 females and 10 lamb rams were sold both at sales and privately, many to a growing number of repeat customers with pedigree flocks.

Five ram lambs, two ewe lambs and two shearling ewes have been selected for the May fair at Exeter on 8 and 9 May.

“It gives me the opportunity to sell my rams and females to a large market as it attracts buyers from all over the UK as well as promoting my flock.”