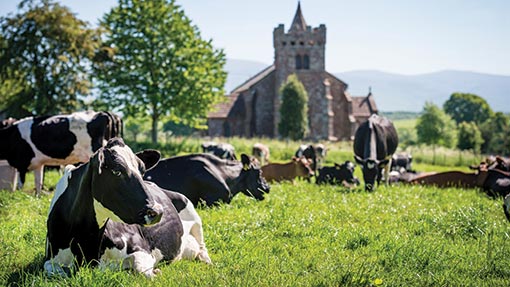 There is growing interest in cross-bred dairy cows and research has confirmed that crossing Holsteins with Jerseys does lead to improvements in health and fertility, due to hybrid vigour.

One study involved crossing Holstein cows with Jersey sires, and the cross-breeds were then kept either on a low-input grazing system or housed year round.

Dr Ferris explained that a key benefit of cross-breeding is the ability to introduce desirable traits from a second breed into their own breed.

“Cross-bred cows produce more milk [than the average yield from the two breeds] due to hybrid vigour and fertility, for example, may be up to 20% better,” he said.

On both management systems the Jersey-crosses outperformed Holsteins on fat and protein percentages.

The total fat and protein output from the low-input grazing system showed Holsteins produced 10kg a cow less, even with their higher average yield (6,091 litres a cow versus the Jersey-crosses’ 5,790).

But despite being 40-60kg lighter, the cross-breeds didn’t eat markedly less. This is because the milk solids yield requires the same amount of energy to produce, said Dr Ferris.

And although they produced 300 litres less than the Holstein on the grazing system, the Jersey-crosses still realised a milk production value a lactation of £1,680, £10 higher than the Holsteins, due to their higher yield of milk solids.

However, in the cows housed year round, 1,500 fewer litres a lactation were produced by the Jersey-crosses, a difference in milk value of £280 (at 26p/litre) when compared with Holsteins.

Dr Ferris said although the milk-solid percentages were higher from the Jersey crosses housed all year, the total output was 66kg a cow less due to the smaller overall milk yield, so cross-breeds would not suit all types of milk contract or system.

“On low-input grass systems Jersey- crosses can compete with the Holstein, but in total confinement the Holstein is still superior due to its milk production genetics,” he added.In a separate study, the hybrid vigour achieved by cross-breeding did show significant benefits in health and fertility, said Dr Ferris.

“The Jersey-crosses experienced 13% lower incidences of mastitis and 8% fewer cases of lameness. They also showed improved fertility across all traits; eight fewer days to first observed heat, a 23% higher percentage of conception to first service and 16% more cows in calf after 14 weeks.”

The study concluded introducing health and fertility traits from Jerseys has helped overcome some of the problems within the Holstein breed which arose from a focus on milk yield. And while feed costs remained the same, vet bills and fertility costs were lower in the Jersey-crosses.