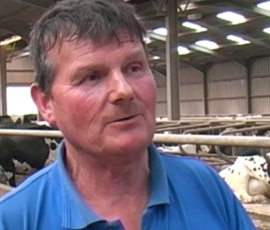 A new heat time pedometer has been launched at the Livestock Event, which is designed to improve the reproductive performance of beef and dairy herds.

Genus ABS European regional director Andrew Thompson said he hoped it would help solve fertility issues, which are still a major problem on some dairy farms.

The national average for pregnancy rates is just 13% and this figure has not improved in the last 10 years, he added.

It is estimated that for every day shaved off the national average calving interval is worth around £9 million to the UK industry.

“Poor fertility continues to be a huge drain on dairy farm profits.”

“Time is a concern with farmers telling us that time to detect heat or to interpret data can be at a premium,” he added.

Breeder Tag measures real-time data such as activity, step-count and lying time in order to determine heat and relays it to a computer, allowing farmers to keep a close eye on performance and avoid missed heats and delayed services.

It has a large 2km range and transmits data wirelessly every six minutes, which makes the information extremely accurate, experts say.

It is currently being used on seven herds within the UK and Ireland where it has been proven to improve time to first service as well as conception rates.

Welsh dairy farmer Paul Williams, who runs a herd 140 cows averaging 10,066 litres, says it has helped him to improve his calving interval and has enabled him to reduce his calving to conception by 40 days.

“I have been able to identify more cows bulling sooner and I have had the confidence to serve cows earlier.”

The detection service is available to everyone, including non-Genus and RMS customers.