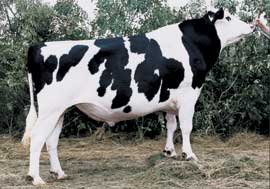 As one of the first UK bulls ever to be used as a sire of sons by major AI studs around the world, he produced more than 200,000 straws of conventional semen and 65,000 straws of sexed semen in his lifetime.

Farmers throughout the UK have been impressed with progeny and there are over 19,968 animals registered with Holstein UK.

However, Lucente’s success was not only recognised on British soils, he has also been in high demand overseas with more than 15,000 straws conventional and 3000 straws sexed exported in the last 12 months.

His international popularity was strongest in Australia with 1907 milking daughters registered in his production proof, closely followed by the US with 1166.

Sired by Brabant Star Patron, Lucente was backed by five generations of VG or EX. Bred by the Spinelli family in Italy, Lucente traces back to one of two heifers purchased directly from the US, to form the foundation of their herd.