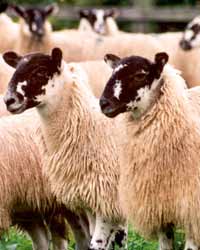 Why wait another year to get output from your ewe lambs? asks sheep farmer, Stuart Stark, Fridlington Farms, Sutton-on-the-Forest, York. “Tupping ewe lambs is common practice in New Zealand – if ewe lambs are big enough, there is no reason to wait.

“There are very few extra costs associated with breeding early – essentially you are getting a lamb for nothing.”

And research shows when lambed as ewe lambs, a sheep’s lifetime productivity is higher than those not lambed until they are shearlings, says independent sheep consultant, Lesley Stubbings.

“But, when you are going to lamb ewe lambs needs careful consideration, to ensure they are given enough attention,” she says.

Last season was the first year Mr Stark put a tup to ewe lambs from his 4500 ewe flock. “Ewe lambs lamb in mid May – slightly later than the rest of the flock, which lamb in mid April.”

Mr Hunt has been buying in ewe lambs and breeding from them as an additional enterprise to his flock of 1400 ewes, for several years.

“We buy in about 1100 ewe lambs in the autumn and keep a proportion as replacements, selling the rest as shearling ewes the following autumn.”

Ewe lambs are lambed after the main flock, at the beginning of April, to make sure they are mature enough. “This also allows us to give them maximum attention.”

“By buying a large number of ewe lambs we can also justify the added labour.”

It is a fine balance between getting ewe lambs big enough and producing enough milk, and not feeding them so much that the unborn lambs get too big, says Mr Hunt.

It must be remembered these ewe lambs are still growing and will need feeding accordingly, says Ms Stubbings. “They need feeding to grow and to develop the lamb too.

“It is best to feed them a little extra all the way through the winter rather than try and feed them a lot pre-lambing.”

And scanning is essential when it comes to ewe lambs, stresses Ms Stubbings. “It is important to know which ones are carrying multiple pregnancies so you can decide how you are going to deal with them.”

“In most cases those with two or more lambs will need one lamb removing to ensure lambs receive sufficient milk and the mother is able to grow on well enough.”

We will keep multiples on the ewe lamb if she is producing enough milk, but we ensure mothers are fed hard after lambing, says Mr Hunt. “Lambs are also creep fed to ease the pressure on the mother.”

Last year, at Fridlington Farms, rams were put out with all ewe lambs. However, because of poor weather, lambing percents were not as high as were wanted.

“This year, we will split lambs off depending on weight. And any ewe lamb weighing 42kg or more will be served,” says Mr Stark.

To ensure a compact lambing it is best to use teaser rams and only allow ewe lambs two cycles with rams, says Ms Stubbings. “This means you’ve got a compact lambing with a definite end point and can manage the flock accordingly.”

And by lambing younger ewes, animals have the opportunity to build up natural immunity earlier, explains Mr Stark.

“Campylobacter can be a problem. The advantage of lambing younger ewes is, if they are exposed to campylobacter bacteria and abort they will become immune. This means when they come to lamb as shearlings there will be no problem.”