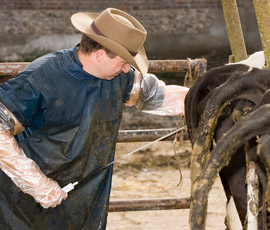 The bull proofs, which were published by DairyCo Breeding+ this week saw ALH Dakota moving up to number one position from second place.

And although his daughters continue to demonstrate low cell counts, it is improvements in their fertility (Fertility Index 0.8) and lifespan (LS 0.5) which have elevated Dakota from second position. This Lifespan Index is among the best of the top 50 PLI bulls, and his PLI is now an impressive £258.

Dakota is proven in The Netherlands and is out of the well-known Markwell Durham Daisy EX92.

Former number one sire, Lynbrook Jancen, shares Dakota’s exceptional transmission of longevity, although is edged into second position with a PLI of £242.

Climbing into third position is Morningview Levi, an Oman grandson who made his debut in April 2011. Sired by Buckeye and out of Morningview Oman Libby, he is the best daughter fertility improver (FI 5.1) in the top 10.

Timmer Tyson (PLI £224) and Mainsteam Manifold (PLI £222) are familiar names in the top 10 and retain their positions. Both bulls have strong showings for the all-important fitness traits of SCC, lifespan and fertility and Tyson (only available in Northern Ireland) continues to feature as a milk quality improver.

UFM-DUBS AltaEsquire moves up into seventh position, gaining 13 points PLI to £220. He transmits extreme fat yield (PTA fat 37.2kg) for which trait he is the highest available in the UK. He stands one PLI point ahead of Long-Langs Oman Oman at PLI £219.

Best of the British breeding and convincingly earning his place in the top 10 is Ballycairn Tiergan, who is establishing himself among the very best bulls worldwide. He improves his SCC Index to -18 and with a Type Merit of 1.8 he is the highest type transmitter of the top 10 PLI bulls. Also the highest ranking Goldwyn son and the highest ranking bull without Oman blood, he weighs in with a PLI of £216.

Speaking about the latest bull proof run, Marco Winters, head of genetics at DairyCo, said: “British bulls have performed particularly well in this proof run. We have a genuinely world-class performer in the shape of Tiergan and others hard on his heels.”

There was also a new number one sire for the British Friesian ranking. UK-tested Morcourt Hilton breaks through the £200 Profitable Lifetime Index barrier. This son of Tittenser Hylke combines impressive production figures with solid traits for fitness and has a PLI of £214.

Also new into the top five of DairyCo’s British Friesian PLI rankings is Lakemead Randolf, maternal brother to the popular Lakemead Rancher. Sired by Marshside Rocket 3 and out of Lakemead Rachel 13 EX91 from Mary Mead’s Somerset herd, his Lifespan Index at 0.6 is the highest in the Friesian breed. His PLI is £163.

Other breeds highlights are:

• Drisgol Watzon, who maintains his strong lead in the Shorthorn rankings.

• Prossli keeps his lead for the Brown Swiss breed with a very good Lifespan Index.

“It’s always worth a reminder that genetic indexes should not be compared across breeds,” says Mr Winters.

“For those who want to compare one breed with another in considering cross-breeding options, DairyCo provides a conversion formula for this purpose.”