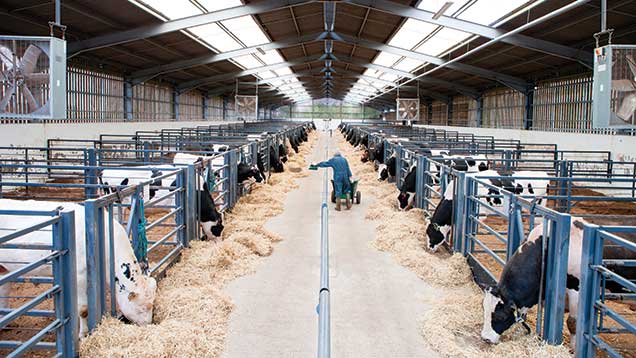 Every year, dairy cows across the UK are inseminated with £2m straws of semen from hundreds of different bulls. Wendy Short went behind the scenes at the Cogent UK Bull Stud in Cheshire, to track the process from bull to AI straw.

What many people don’t realise when they are inseminating their cows is that for every five bulls purchased by an AI dairy stud each month, about 70 individuals will have been rejected in the hunt for the top genetics.

Breeding company Cogent collects semen from more than 150 dairy bulls each year. They travel the globe to find the best bulls and rely on a network of contacts and top-notch breeders to find potential stud animals and occasionally visiting shows and sales.

They also scrutinise published ranking lists, with selection limited to registered animals from families which have consistently delivered outstanding performance.

Once a potential sire has been identified, a Cogent specialist will visit the farm, to make a visual assessment and inspect related animals.

The advent of genomics has radically changed the dairy bull selection process over the past few years, says Cogent operations manager Innes Drummond.

Most of the bull calves begin evaluation at under eight weeks of age. Hair samples are taken from the best breed examples for DNA testing, with an accurate prediction of its potential future performance available well before it reaches six months old.

“Genomics speeds up genetic progress and therefore dairy bulls are likely to be kept at stud for shorter periods,” says Mr Drummond. “The technology also helps to identify weaknesses and improves the accuracy of best-match mating programmes.

“Bull choice is influenced by fashion, political and economic trends. We have to follow current market demands and anticipate future requirements, which differ between countries. For example, many UK producers are rewarded on components, while milk buyers in the US generally pay on volume.”

Life as a stud bull

After a series of stringent health and biosecurity tests for all the regulatory health requirements, the top 50% of bulls are marketed as young genomic sires, while the remainder go into a lay-off facility in Yorkshire as progeny test bulls.

Some 1,250 straws from each animal are offered at a maximum of 10 straws a herd, at a preferential rate. They are spread over a broad cross-section of dairy farming systems, to increase the reliability of the data.

Meanwhile, evaluation of the second crop does not take place until the bulls have daughters milking and any sire which fails to live up to expectations is removed from the programme.

A popular dairy bull can remain at stud for many years. Quality and volume of semen does not necessarily decline as the bull ages and one Cogent sire is still producing viable sperm at 14 years old.

Housed in individual pens, the bulls are fed barley straw and a specific concentrate ration. The diet does not change, as alterations can affect sperm quality consistency. The bulls also have access to a sand arena and playpen for exercise, to keep them fit and healthy.

Semen collection begins at 11-12 months, when the young bull will join several others in a show style parade around the cushion-floored ring, to encourage libido.

A teaser bull is used for mounting and after three or four false mounts, the handler will decide when to use the artificial vagina for collection. Judging the right moment to achieve maximum semen quality takes a great deal of skill, says Mr Drummond.

The frequency of collection depends on the bull’s age, with ejaculate from a young bull taken once a week and up to five times a week for a mature animal.

Dairy bull semen is collected all year round, while beef semen collection is generally limited to spring and autumn.

Speed of handling is vital to preserve quality and it only takes a few seconds from collection to examination in the adjacent laboratory. This is where sample quality is identified and dilution levels set. The type of medium for sperm preservation will depend on the individual bull.

“We use different types of preservation material,” says Mr Drummond. “Experience tells us which one will suit a particular bull. Each straw will also contain a small volume of cryoprotectant, to protect the sperm during the freezing process.”

After collection, a temperature-controlled environment takes the semen from body temperature to 5C, where it remains for a minimum of four hours, to adjust to the new environment.

It is then packed in straws ready for freezing, which is achieved using a temperature-controlled cooling curve. Mr Drummond points out that the freezing and thawing process can kill or damage sperm, so the material needs to be handled with care.

After 24 hours in frozen storage, sample straws are selected, thawed and tested rigorously for quality and viability. In total, the semen is subjected to seven different quality control tests, before it is released for commercial sale. The straws are then quarantined for at least 30 days, ahead of commercial distribution and must remain under liquid nitrogen, to maintain maximum semen quality when thawed.