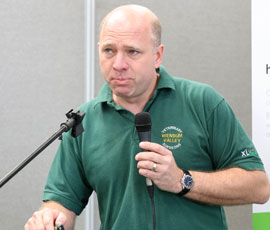 Farmers are being warned to be vigilant for difficult calving as cases of Schmallenberg virus in cattle are expected to peak over the next few months.

Speaking at Beef Expo in Malvern, vet Tony Kemble of Wensum Valley Vets said the number of cattle cases were slowly rising with the suspicion there were “more cases out there”.

“The reason we are beginning to see cases coming through is because calves are only just being born after their mothers were infected with the virus 70-110 days in to pregnancy. So we expect the peak in cases to be seen between March and July,” he said.

But, Mr Kemble said the number of cases were probably much higher than official records showed. He explained calves suspected of having the disease – including some with obvious deformities – could still test negative because the virus had left their bodies while they were still in utero.

“It may be that if calves were infected in day 70 of pregnancy and are not being born until seven months later there is a longer period between infection and testing.”

The south and east of England is where Mr Kemble expected most cases to be concentrated and stressed any farmers experiencing difficult calvings to contact the vet immediately.

“It’s important to keep a close eye on calving cows and intervene sooner that you normally would. It is possible that if you try calving a cow carrying a deformed calf you could tear the uterus. Ultimately the cost of a caesarean is cheaper than loosing their cow,” he said.

Mr Kemble also recommended using an insecticide in a bid to avoid infection.

“Insecticides are going to help control midges biting cattle, but no insecticide is 100% effective. Serving cattle when midges are also inactive and or the foetus is not in the vulnerable period of 70-110 days is another route to avoid infection. This would mean serving in October/November which may not fit in with many management systems.”

Keep up with Schmallenberg news on our dedicated page